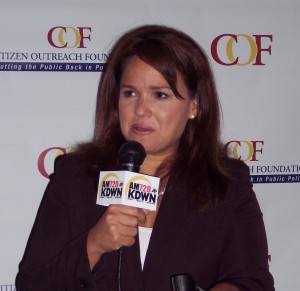 (Lori Piotrowski) – In 2010, Christine O’Donnell became a household name throughout the country when she defeated Michael Castle in a primary to run for Joe Biden’s senate seat in Delaware. Although she did not succeed in her bid to become the next Senator, she has remained involved in politics, forming ChristinePAC and writing a book, Troublemaker: Let’s Do What It Takes To Make America Great Again.

On Friday, September 2, Ms. O’Donnell was the guest speaker at First Friday Nevada, a monthly gathering of conservatives, at Mundo’s restaurant in the World Market Center in Las Vegas. She addressed the crowd as a whole and then met wit individuals and signed copies of her book.

O’Donnell explained that she wrote the book to provide insight into what she did, the mistakes she made during the campaign, and how she found the courage to continue. She added, “I want the book to inspire readers to get involved and run for office.”

“While they try to blame us for the debt ceiling, and everything else—don’t take the bait.”

“The Constitution should be the litmus test by which we judge all bills and policy.” She continued, “Career politicians in Washington need to be held accountable for what they accuse the tea party of.”

She encouraged the audience to keep involved, even if they are tired, or broke, “but do not let them use the politics of destruction to send us back to the sidelines. Singing Kumbaya won’t stop the debt train from derailing.”

It takes generations for change to occur, she said, and “we are making progress; we are putting pressure on the door.”

“The foreign press calls this the Second American Revolution. Do we exchange our freedom for tyranny or for a system like the French did with their revolution?”

O’Donnell concluded by exhorting the audience to keep their efforts going:”If our message of liberty isn’t resonating, reframe the argument.”

Chuck Muth, president of Citizen Outreach, recognized Alan Stock, KDWN 720AM talk show host as emcee of the event and welcomed KDWN as a new sponsor of the monthly event.