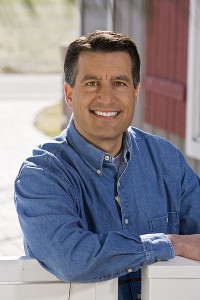 Maybe it’s time to throw caution to the wind and get 200,000 signatures to force him to a recall election. (Courtesy: Wikimedia Commons)

(Fred Weinberg) – The state of Nevada has been overrun by RINOs who seemingly think that acting like liberal Democrats is the way we show our regard for individual responsibility and smaller, less intrusive, government.

First, they gave us the largest tax increase in the state’s history—ostensibly for the children even though; a) most of the money won’t go to the schools, and; b) giving a failing school system more money has never worked in the past.

Then, they created an Educational Savings Account system which cannot work because you have to be in the public school system for 100 days before you can opt out.  That was given as a sop to the teachers’ union because, even though the RINOs had the votes, they didn’t have the testicles.

Then, after raising taxes, they gave the gift of tax cuts to bribe two companies to locate plants in Nevada.

One of those companies has at least made a car.

The other, not so much.  Not even a prototype.

And, finally, the gaming regulators, who looked the other way when MGM hooked up with a mobster in China and Harrahs (now known as Caesars Entertainment) borrowed so much money that it ended up in bankruptcy, have the unmitigated gall to be “concerned” that Sheldon Adelson has purchased the Las Vegas Review-Journal.

These guys would give a gaming license to ISIS if they were represented by R & R Partners but they’re worried that, somehow, owning a newspaper will make Adelson unfit to own the Venetian and the Palazzo.

Nevada needs a Donald Trump-like figure to serve as an enema for its political system.

Never before has the complete incompetence of the governor and the fecklessness of the legislature combined so as to simply flip the voters off.

And these clowns are actually proud of what they have done.

Let’s throw each and every one of the people who have worked against the interest of the taxpayers out, either at an election or by a recall.

How mad do the voters have to be?

They recalled a governor in California.  And that’s a state which has almost NEVER done anything right.

There’s a reason people like Ron Knecht, Dan Schwartz, Adam Laxalt and Barbara Cegavske won the constitutional offices in 2014.  Believe me, they were NOT riding the Governor’s coattails.

It was the voters saying very loudly that they are mad as hell and they are not going to take it anymore.

Could Brian Sandoval be recalled?

Well, the conventional wisdom says no.

But the conventional wisdom also said that a newly Republican legislature would NEVER enact a tax increase—especially after the voters voted against the very same tax by an 80 percent margin.

Maybe it’s time to throw caution to the wind and get 200,000 signatures to force him to a recall election.

Then we’d see exactly how popular he really is.