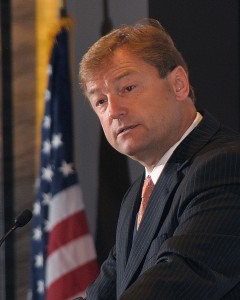 (Senator Dean Heller) – The early weeks of a new year can be the most important and determinative of the next twelve months. This is the time when we focus on the potential for success, when we make resolutions and set goals for ourselves, for our families, for our businesses and endeavors. We want to be better, grow as individuals and achieve new heights in our daily lives.

As we begin 2012 I am looking forward to a new year that will bring new challenges, and with them new opportunities for Nevada and for the nation. I believe we have the opportunity to chart a course toward greater prosperity. But in order to do this, we must work together as Americans to make 2012 a turning point, and to get our country moving in the right direction.

Perspective is critical to reaching any goal. It is essential when assessing where we’re headed, to understand where we’ve been. Nevada has experienced a difficult time during this recession. The failed Wall Street bailouts and failed stimulus plans have left Nevada leading the nation in unemployment and home foreclosures. While Congress still, after more than two years, has not passed a budget, Nevada families are hurting. There’s no question a course correction is desperately needed. And we know the road ahead will not be an easy one.

It’s true that Nevada has been hit the hardest by this recession. Still, I know we can overcome these obstacles and press forward to accomplish great things. I participated in a ceremony this week that illustrates just the kind of perseverance I’m talking about. Two years ago this month there was a tragic shooting at the Lloyd George Federal Courthouse in Las Vegas, where my Las Vegas office is located. That shooting was a sorrowful way to begin the year. But this week, I was proud to honor Deputy U.S. Marshal Joe Gardner with the Inaugural Congressional Badge of Bravery for his heroic acts in stopping a gunman from taking additional civilian lives during that shooting. And as I presented the award, construction was about to begin on a new Federal Justice Tower across the street from the site of the shooting. This new center is to be occupied by the U.S. Attorney’s office, the Department of Homeland Security and other federal law enforcement agencies.

That special occasion illustrates that when tragedy hits and the going gets tough, the American people have a powerful ability to overcome challenges. Attacks can be made on our buildings, but buildings can be rebuilt. The greatness of our country rests on foundations that are unbreakable, and we can build on those foundations this year.

I for one am resolved to do everything I can this year to help get our economy back on track. To accomplish this, Washington needs to focus on policies that restore economic common sense to government. We need to reform the tax code, which has not been reformed in more than two decades. We need to reduce spending, balance the federal budget, and roll back overly burdensome regulations that are stifling growth and suffocating job creation. If we take these important steps, I am confident we will look back on this year as a turning point, when we began a new course toward a better future for our kids and for future Americans.

We’ll have to work together to reach these goals. When I spoke this week in Las Vegas at the Hispanics in Politics breakfast, it was clear to me that as Nevadans and as Americans, we all have fundamental agreements that unite us. The things about which we agree far outnumber the things over which we differ. We value faith, family and self-reliance, and we recognize the importance of a quality education. We want the best for our country, our communities and our children. If we focus on these common goals, and determine to reach them together, this year can be a milestone year for our state and the nation.

I am optimistic that we can reach new heights in 2012. I fully intend on working hard, pressing forward and advocating for policies that will create jobs and encourage economic growth. I believe we are at a turning point, and I look forward with my fellow Nevadans to a happy and successful new year ahead.

Photograph by Steven Sanson at the Conservative Leadership Conference.

Take today’s poll: Do you feel the attacks on Herman Cain were fair and justified?

N&V StaffOctober 4, 2022
Read More
Scroll for more
Tap
The Problem Is Not the Money, but the Power It Can Buy
The GOP Race Today – Who’s Up? Who’s Down? Who’s Done?