A majority in name only

A majority in name only
N&V Staff 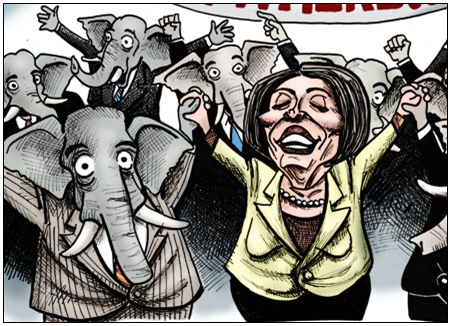 (Robert Romano, NetRightDaily.com) – On Oct. 9, 218 members of the U.S. House of Representatives issued a discharge petition for H.Res. 450, a resolution that will provide for immediate consideration of legislation that will reauthorize the Export-Import Bank of the United States through Sept. 30, 2019.

The vote will now occur Oct. 26, and comes after Congress had allowed the bank’s charter to expire on June 30.

All that, even though we do not need such a bank, Americans for Limited Government President Rick Manning noted in a statement.

“Without any new loans from the Export-Import Bank, U.S. exporters managed to sell $188.8 billion of goods and services in July, and $185 billion in August,” said Manning.

“The reason almost nobody noticed the Ex-Im Bank’s expiration on June 30 is simple. It only accounts for 1 percent of the nation’s $2.344 trillion of annual exports. In other words, its expiration hardly matters at all when companies can just secure financing elsewhere in a global marketplace,” Manning added.

But nobody should be surprised that the bank will survive with House Democrats and a handful of Republicans pulling it out of the fire. This is the style that has marked the tenure of House Speaker Rep. John Boehner (R-Ohio).

“There isn’t a major piece of legislation that has not depended on Democrats to pass,” Manning said. He’s right.

When the most recent continuing resolution came up that included funding for Planned Parenthood, a majority of House Republicans voted against it.  But it passed anyway with 186 Democrat votes to get across the finish line.

When funding for the Department of Homeland Security in March that included funding for President Barack Obama to implement executive amnesty for millions of illegal immigrants with U.S. born children, a majority of House Republicans voted against it. Yet it passed with 182 Democrats and some Republicans.

When the continuing resolution funding Obamacare came up in 2013, a majority of House Republicans voted against it. But again it passed with 198 Democrats helping it along.

A majority of House Republicans voted against the tax bill that raised taxes on those making $400,000 and above, including many small businesses, legislation that passed.

A majority voted against so-called hurricane “disaster relief” because it was unpaid for and was stuffed with billions in unrelated pork even as it passed with Democrat support.

They also needed Democrat votes to get the March 21, 2013 continuing resolution across the finish line, too. Just like the vote to suspend the debt ceiling until May 19, 2013 — they needed Democrats for that vote.

Just like the vote on the continuing resolution that came before that. Or when the House increased the debt ceiling in 2011 before that.

In short, to accomplish anything, since becoming Speaker, Boehner has required the votes of Nancy Pelosi and House Democrats.

The evidence that the true majority of the House are Democrats and handful of Republicans is overwhelming. Elections be damned.

So, perhaps they should just band together and make Pelosi the next Speaker. That would be more honest than the charade going on now.