But thanks to Secretary of State Barbara Cegavske, you can now quickly and easily “opt out” from receiving a mail-in ballot in 2022 if you fear your ballot might be lost in the mail or stolen.

Here’s how Secretary Cegavske explains what to do…

“With the passage of AB321 in 2021, we are now a ‘Vote By Mail’ state. This means that every active registered voter will receive a mail-in ballot for every election in which they are eligible to vote.

“If you do not want to receive a mail-in ballot, you can choose to ‘opt out’. To do so, please visit your clerk’s office or use the form located here: https://nvsos.gov/sos/elections/2022-election-information

“To answer a question that many of you have been asking, no, you do not have to submit an ‘opt out’ form to vote in-person.  You are still able to vote in person even if you receive a ballot in the mail. Just bring the ballot to your polling center and turn it in.”

I’ve already filled out my “opt out” form and sent it in.

* The official Clark County Republican Party under new Chairman Jesse Law has filed a lawsuit against Nevada State Sen. Carrie Buck and the rogue former officers of the party for continuing to falsely claim they are the legitimate party organization in the county and for failing to turn over control of the party’s financial records and communications apparatus.

They’ve been sued individually, meaning they’re personally on the hook for damages if they lose this suit like they’ve lost the others.

* While Megan Barth and I haven’t always seen eye-to-eye on some issues, her new @NevadaGlobe deserves a follow on Twitter by conservatives.

* I don’t know about you, but my limited stock portfolio was worth a LOT more back in January than what it’s worth today.  Sure could use some “mean tweets” right about now. Let’s Go Brandon! 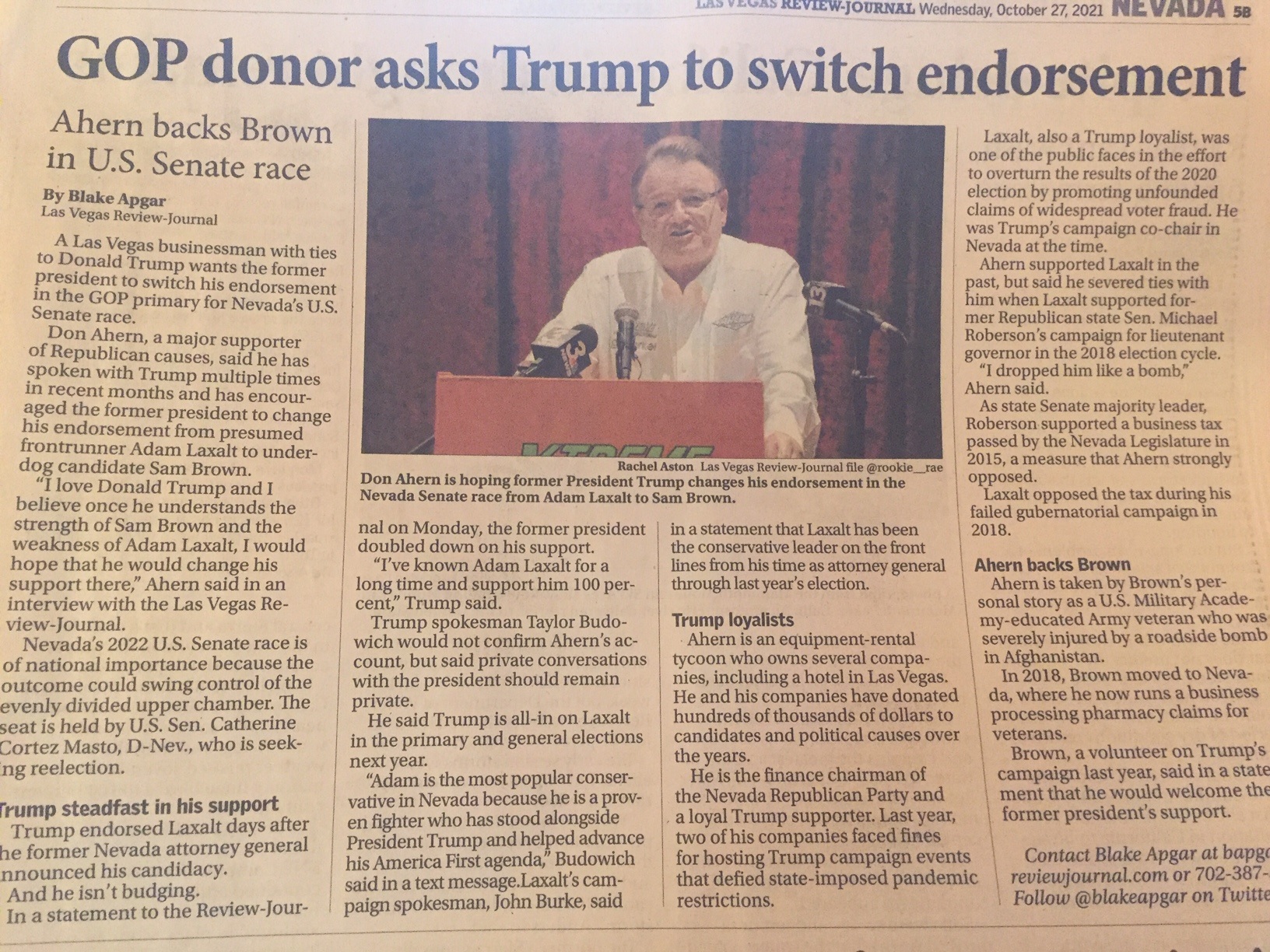 “I love Donald Trump and I believe once he understands the strength of Sam Brown and the weakness of Adam Laxalt, I would hope that he would change his support there,” Ahern said in an exclusive interview with Blake Apgar of the Las Vegas Review-Journal.

And Mr. Ahern’s not alone.  Here’s another in the flood of emails I’ve received from Nevada conservatives who don’t believe Laxalt has the right stuff to win the seat in the 2022 general election…

“Chuck, I was so frustrated in 2017 at Adam (Laxalt’s) inability to show up almost anywhere in Clark County where 70% of the voters reside. When he did, he was arrogant about explaining his family history and, therefore, why he was entitled to be the Gov.

“He seemed snobbish about being with the general population—flatly refusing to answer some questions. He would hang around for the VIP events and leave before the doors to steerage were opened. I was disappointed when I asked him about Yucca Mountain and the man who wanted to be my governor rolled his eyes at me.

“Adam was a competent AG (attorney general), but he is not a good candidate and did not appear to be coachable.” (name withheld)

Conservative boat-rocker Melissa Blundo – co-founder of the No Mask Nevada PAC – has scheduled a big announcement/cookout for this Friday out in Pahrump to celebrate Nevada (not California) Day.

Man or woman. Black or white. Gay or straight.  Whatever.

Just be VERY careful of trans-Republican candidates who “identify” as conservatives but are actually nothing more than Democrat-Lite.

Thinking of running for office or know someone who is?  Sign up for my FREE “Campaign Hot Tips” e-newsletter.  Click here

“I dropped him like a bomb.” – Don Ahern explaining that he ended his support for Adam Laxalt after Laxalt tapped former RINO State Sen. Michael “Tax Hike Mike” Roberson as his running mate in the 2018 gubernatorial election

Last Night Wasn’t an Awakening; It Was a Reckoning

No Mask Warrior Goes All In, Announces Challenge to “Wet Noodle” Assemblyman