A Word With The Delaware Troublemaker

A Word With The Delaware Troublemaker
N&V Staff 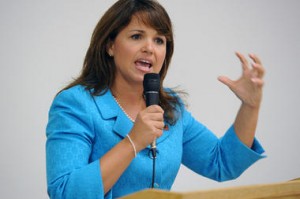 (Christine O’Donnell became a household name when she ran for Vice President Joe Biden’s senatorial seat in Delaware in the 2010 election. She will be speaking at First Friday on September 2 and signging copies of her book, Troublemaker. Join us at Mundo’s (495 S. Grand Central Pkwy) from 5:00 – 7:00. – Ed.)

NN&V: Please describe what spurred your becoming a candidate in the Senate race in 2010.

O’Donnell: Folks in Delaware who felt shut out of the political process asked me to run in order to shake up the establishment status quo. I think we succeeded!

NN&V: What was the primary lesson you took from the campaign?

O’Donnell: The primary lesson from the campaign is to listen to your gut and trust your common sense instincts. It is my hope that the middle class movement that is fueling this Second American Revolution will learn from my mistakes as I detail in the book.

NN&V: As you reflect on the campaign, what would you do differently?

O’Donnell: My biggest regret is producing that silly first campaign ad. I go into more detail in the book about it., however, I detail it the way I do hoping that the reader will learn the lesson I just described in number 3!

NN&V: What was the high point of the campaign? The low point?

O’Donnell: The high point of the campaign was meeting so many people on the campaign trail who told me my campaign inspired them to get involved in politics, many for the first time. I met people who were in their fifties and sixties and had never voted until my campaign. That is a very humbling thing to hear and the fact that so many everyday Americans felt inspired and empowered by my campaign makes it all worth it.

The low point was when that silly ad went viral before I even saw the final cut. I describe it in detail in the book, Troublemaker.

O’Donnell: The fact that Congress did not recklessly raise the debt ceiling without at least considering and debating a long-term solution demonstrates the staying power and wonderful influence of this middle-class movement that is fueling the Tea Party. There is a growing discontent with career politicians who have turned Congress into a favor factory. This movement is inspiring everyday Americans to speak up and defend common sense.

Not too long ago, we saw the CEO of Starbucks speak out as a registered Democrat, saying that much of the economic crisis is caused by failed leadership coming from Washington. While that CEO might now consider himself part of the Tea Party, his actions and what he said are very much in the spirit of what this whole movement embodies.

Going into 2012, if the movement does not get distracted when frightened elitists try to bait them into a fight, such as when Biden called the Tea Party terrorists, this grassroots groundswell will continue to have a major influence on getting our country back on track.

As citizen activists speak up, and citizen politicians step up to the plate to run, career politicians are held accountable to serve the needs of the constituents rather than the needs of themselves. Win or lose, when this happens, it has a very powerful impact … for the good!!

If the Tea Party does not take the Biden bait aimed at distracting voters from the real message, this movement that puts the political process back in the hands of the people will continue to propel forward and gain steam and be the powerhouse that ensures Barack Obama will be a one-term president!

NN&V: In what capacity are you still involved in politics in Delaware?

O’Donnell: We started ChristinePAC in order to continue what we started in the 2010 campaign. As best put by one of our supporters, we won every battle we set out to fight other than the detail of who is representing us in Washington!

We engaged people who’d never before been involved in the political process. We brought important issues to the forefront of the public debate. We busted up the backroom deals and challenged the Lords of the Backrooms’ obnoxious sense of entitlement. These are all excellent, major accomplishments.

ChristinePAC is also fighting back against the corrupt practice of abusing the justice system as a political weapon. In my race, both the former Delaware GOP leadership and the ultra-liberal group CREW filed false legal claims against me so that headlines would read I was being investigated. Months after the election, all claims have been dismissed as the politically motivated vindictive nonsense they are. But it is illegal to file a false claim in the first place!

So we are countering this fraudulent use of government resources by asking the Delaware Attorney General (Beau Biden, Joe’s son) and the U.S. Attorney’s office to pursue criminal charges against CREW for knowingly filing a false claim. We submitted solid evidence proving that CREW perjured their affidavit in my claim. We are also asking the IRS to revoke their 501(c)(3) tax status as they clearly are engaging in political activity, which is a violation of their non-profit tax status.

NN&V: What do people not know about Christine O’Donnell?

O’Donnell: There is too much that people don’t know about me, which is why I wrote Troublemaker. I wrote it in such a way that I wanted the reader to feel like we were sitting on the couch, enjoying a cup of tea, and just talking and reflecting about all that happened in 2010—why I got involved in the first place and what we need to do going forward. I want the readers to really feel like they know me, not the caricature that was portrayed last year during the campaign. Much of Troublemaker was taken directly from a campaign journal, so it is real, candid, and honest. I am grateful that reviews so far have picked up on that, because when you put yourself out there like that, so vulnerably honest, you want it to be received in the purpose it was intended. I wrote it that way because I wanted the reader to feel like, “If she can do it, so can I!”

NN&V: What’s the next dream for you to fulfill?

O’Donnell: For now, I hope to remain a voice going into 2012. I have been honored to be called a leader in this Second American Revolution, and I take that honor seriously. I hope to continue to inspire people to get involved no matter how hard it is or how great the pushback may be. I hope to remind everyday Americans of what it means to be an American, what freedom means, and thus in doing so, not only remind them that it is worth fighting for, but empower them in the process.