America First Agenda Threatened by Barbarian Lobbyists at the Gate 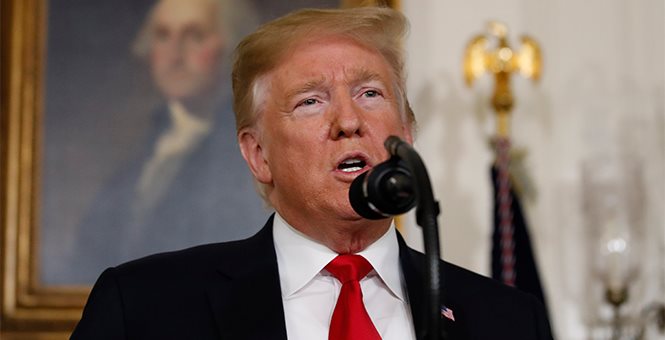 In his 2017 inaugural address, President Donald Trump declared simply and unmistakably: “From this day forward, it’s going to be only America first. America first.”

Alas, American voters have become understandably cynical about the commitment to promises, no matter how forcibly delivered, made by politicians.  But two years later, on January 18, 2019, President Trump posted one of his now-infamous tweets.

Indeed, the president’s commitment to protecting and serving America first hasn’t waned.  If anything, it’s only gotten stronger despite—or maybe because of—the drumbeat of negativity and hysteria coming from the mainstream media.

The Trump Doctrine stands in stark contrast to that of the previous administration.  No longer does America acquiesce to the whims of other nations. No longer does the United States bow at the altar of Obama-era globalism.  No longer does weakness and vacillation poison our leadership position in the international community.

Halfway through his first term, there’s no doubt that Mr. Trump has kept his word to put the interests of the American people at the forefront. The evidence speaks for itself.

In 2017 the president boldly decided to renegotiate NAFTA – the trade agreement between the United States, Mexico, and Canada. One year later, he succeeded in making the deal more beneficial for American laborers and manufacturers with the signing of the United States-Mexico-Canada Agreement (USMCA).

And despite it being labeled as foolhardy by detractors, Mr. Trump’s hardline “America First” approach has prompted the Chinese to negotiate with us for more equitable trade deals.  Indeed, according to the president’s top economic advisor, China has expressed a willingness to meet many of our demands.

These victories demonstrate the wisdom of Mr. Trump’s approach and affirm his commitment to ensuring American competitiveness internationally. But perhaps the most impressive step forward for his America First agenda has been in domestic policy.

The passage of the 2017 Tax Cuts and Jobs Act is undoubtedly Mr. Trump’s greatest legislative accomplishment. Tax reform let Americans keep more of their own money and substantially increased the clout of U.S. industries on the world stage. It cut the corporate tax rate from 35 to 21 percent, placing us more in line with those levied by other industrial nations.

Clearly, the president’s commitment to protecting and serving America first has been a “yuge” success.  But that doesn’t mean danger no longer lurks outside the door.

Special interest groups that don’t share the president’s commitment to America First continue to lobby for special treatment and exemptions which would erode the new competitive edge for American industries by privileging certain businesses at the expense of others.

For example, there are more than 100 trade groups currently pressuring Congress and the White House to drop President Trump’s tariffs on Chinese imports without first securing America First concessions in new trade agreements.

These organizations seem to care more about their short-term bottom lines than the inevitable opening of more international markets to the American people. They refuse to accept that the president’s long-term strategy is working and that China is already reducing and removing some of its worst tariffs thanks to the added leverage President Trump has gained on behalf of American businesses.

If Congress stays the course, there may soon no longer be a need for such a tough trade policy with China. However, if these trade groups get their way and strip the president of his leverage before the U.S. secures a full victory, we’re going to be right back where we started from.

Another potential threat is coming from some foreign special interests that are currently lobbying the federal government to reinstate various tax loopholes that Republicans in Congress wisely eliminated in 2017.

Specifically, they are lobbying to restore a loophole which allowed foreign insurance companies to avoid paying taxes by collecting premiums in the U.S. but then shifting the money to overseas tax havens in Bermuda or Switzerland through a process called “affiliate reinsurance.”

Unsurprisingly, allowing foreign insurance companies to avoid paying taxes that U.S. companies were saddled with led to a significant decline in the American insurance market.  As such, according to Bloomberg, as many as 36 U.S.-based insurance companies relocated their headquarters abroad between 2004 and 2016.

Given the sweet deal they had prior to its elimination, it’s no surprise foreign insurance lobbyists are now fighting tooth and nail to bring it back.  But that would NOT be putting America first.  Let’s hope the administration tells ‘em to pound sand.

President Trump has thus far done more to boost American competitiveness on the global stage than anyone else has in decades.  But history will judge him by what changes he manages to retain at the end of his presidency, not what he was able to accomplish in the first two years.

To cement his legacy, Mr. Trump must beat back efforts by special interest groups seeking to carve out benefits for themselves at the expense of American businesses. Eternal vigilance isn’t just the price of liberty.  It’s the price of not only making America great again, but keeping it that way.