Assange: WikiLeaks to release ‘a lot more’ on US elections

Assange: WikiLeaks to release ‘a lot more’ on US elections
N&V Staff 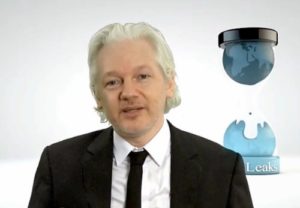 WikiLeaks founder, Julian Assange, apprised everyone of another round of publication of Hillary’s emails during the elections. (Courtesy: The Hill)

In an interview by CNN’s Matthew Chance, Assange did not admit Russia’s involvement of the alleged hack of Hillary’s emails but only raised the impression that WikiLeaks is a source protection agency and is thus bound to conceal the circumstances of the documents they publish. In order to do this, the organization rather creates a maximum ambiguity on the identity of their sources.

Assange further looked forward of the interesting implication of a possible discovery as to who the real sources of their documents are.

When asked about Hillary’s rebuttal over the publication of her private emails, Assange concluded that the Democratic presidential candidate’s statements all but form a one political, managerial style that could most likely fall into a conflict. He said what Hillary does every time she’s confronted with a political issue is to divert people’s attention by blaming others. And this would very likely cause a dispute between her and the party blamed.