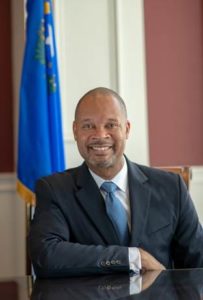 Today, Nevada Attorney General Aaron D. Ford was sworn in as Nevada’s 34th attorney general and the first African American to take statewide constitutional office. He swore an oath to serve and protect Nevadans at an 11:30 a.m. ceremony in front of the Capitol Building in Carson City. Nevada Supreme Court Justice Hardesty administered the Oath of Office to AG Ford, along with the five other constitutional officers. At the ceremony, AG Ford was joined by members of the public, as well as his family, friends, staff and numerous other public officials.

“As attorney general, I’m humbled and honored to answer the call of service to my fellow Nevadans,” said AG Ford. “The job of the Office of the Attorney General is justice, and I will use the full weight and power of the Office to ensure all Nevadans are safe from harm and able to succeed. With a dedicated team of state employees and partner law enforcement agencies, I will fiercely defend our state, its Constitution and its residents.”

Before his election, AG Ford served as the Majority Leader of the Nevada State Senate. He previously served as the Minority Leader, Assistant Majority Whip, chair of the Senate Committee on Natural Resources, vice chair of the Senate Committee on Education, and member of the Judiciary Committee. Before beginning his legal career, AG Ford served as a public school math teacher, shaping hundreds of lives. He later attended law school and went on to clerk for the Honorable Denise Page Hood of the U.S. District Court for the Eastern District of Michigan, as well as the Honorable Johnnie B. Rawlinson of the U.S. Court of Appeals for the Ninth Circuit. He spent many years in private practice, including as a Partner at Snell & Wilmer LLP and later as Partner at Eglet Prince, both in Las Vegas.

AG Ford married his college sweetheart, Berna Rhodes-Ford, who is also an attorney. Together, they raised four children, Avery, Devin, Aaron II and Alexander. For a complete biography of AG Ford, click here.