(Office of the Attorney General) – Carson City – Nevada Attorney General Adam Paul Laxalt announced that former Financial Horizons Credit Union employee Daylene Tibbals, 29, of Yerington, was sentenced this week on one felony count of fraudulent use of a credit card, a category “D” felony. The fraud was committed between January 2010 and December 2011.

“Nevada’s Elder Abuse Task Force works to ensure the safety and well-being of the seniors in our community,” said Laxalt. “This prosecution demonstrates the firm stance this office will take against elder abuse, and highlights our commitment to the protection of the most vulnerable members of our society.”

Third Judicial District Court Judge Leon A. Aberasturi sentenced Tibbals to 12-32 months in prison, suspended, and probation for two years. Tibbals was also ordered to serve 30 days in the Lyon County Detention Center and pay more than $10,500 in restitution as part of her punishment. 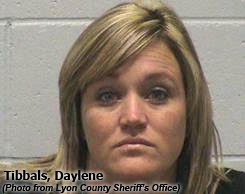 To view the criminal Information, click here. To file a complaint with the Nevada Attorney General’s Office, click here.