(Office of the Attorney General) – Carson City – Nevada Attorney General Adam Paul Laxalt announced that Stephen Choate, 62, of Pahrump, was sentenced last week on a charge of pattern of mortgage lending fraud. Choate ran a scam to defraud clients of $11,500 in fees under the guise that he would obtain loan modifications for them. He cheated homeowners between November 2010 and February 2012.

“The Attorney General’s Office will prosecute those who aim to defraud homeowners,” said Laxalt. “Nevadans seeking assistance with their mortgages are urged to consult HUD-approved counselors. Under Nevada law, it is generally unlawful for a non-attorney to collect upfront fees for loan modification work before the homeowner signs a contract with their lender modifying the loan.”

Fifth Judicial District Court Judge Robert Lane of Nye County listened to testimony of more than nine victims before imposing the sentence. Judge Lane sentenced Choate to a minimum of eight years and a maximum of 20 years in prison. He was also ordered to pay $11,500 in restitution, plus additional sums for monthly fraud protection and legal fees. 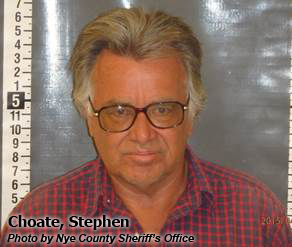 To read the criminal Information for Stephen Choate, click here. To file a complaint about someone suspected of committing a fraud, click here.

The Office of the Attorney General is headed by Attorney General Adam Paul Laxalt. The office’s primary role is to serve the citizens of Nevada and to work to make the state a stronger, safer and freer place to live. Visit its website at http://ag.nv.gov.