(Office of the Attorney General) – Carson City, NV – Nevada Attorney General Adam Paul Laxalt announced that Tanya Troup, 43, of Las Vegas, was sentenced this week for submitting false Medicaid claims for behavioral health services that were not provided. Troup entered a guilty plea to one count of intentional failure to maintain adequate records, a gross misdemeanor. The fraud was committed between March and September 2012.

“Those who commit such fraud will be pursued and prosecuted. Fraud of any amount and under any circumstance cannot be tolerated. Health care providers who flout the principles of the Medicaid system for monetary gain not only fleece taxpayers, but the very individuals the Medicaid programs are designed to serve,” said Laxalt.

Eighth Judicial District Court Judge Carolyn Ellsworth sentenced Troup to 364 days of jail, suspended, and payment of more than $15,400 in restitution. She was also ordered to complete 100 hours of community service, and immediately paid the full amount of restitution. 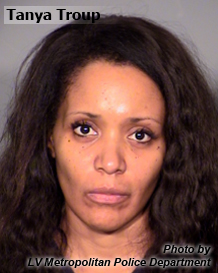 Troup provided behavioral health services through Serenity Mental Health, a company that provides services such as substance abuse and rehabilitative mental health services. These services included therapy and other interventions designed to teach constructive cognitive and behavioral skills. An investigation by the Attorney General’s Medicaid Fraud Control Unit (MFCU) revealed that Troup created and submitted fraudulent service documentation to Serenity Mental Health for services she failed to provide to Medicaid recipients. The MFCU discovered that while Troup was outside the state and unavailable to provide services, she asserted that she had provided services to several Medicaid recipients. In her documentation, she also asserted that she had provided services to a family of Medicaid recipients after the date the family had moved out of the state.

On behalf of the attorney general and the state, the MFCU investigates and prosecutes financial fraud by those providing healthcare services or goods to Medicaid patients. Persons convicted of Medicaid fraud may also be administratively excluded from future Medicaid and Medicare participation. Anyone wishing to report suspicious activities regarding any of these concerns may contact the MFCU at 702-486-3420 or 775-684-1100.