(Office of the Attorney General) – LAS VEGAS – Nevada Attorney General Adam Paul Laxalt announced the filing of a brief in the U.S. Supreme Court supporting a religious ministry’s challenge to the federal government’s taking of the organization’s desert stream without due process or compensation. Ministerio Roca Solida is appealing a federal court ruling that bars the ministry from having one of its constitutional claims heard unless it gives up its other constitutional claims.
The ministry, founded by a Cuban political refugee named Victor Fuentes, is located in Nevada’s Amargosa Valley. It serves unprivileged children from Las Vegas and, until recently, contained a desert stream used for baptismal and recreational purposes. Without compensation or due process, the federal government rerouted the stream, subsequently flooding and damaging the ministry’s property. 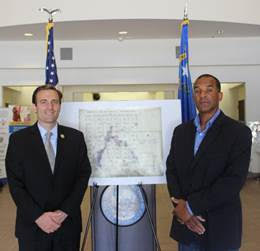 “This is the powerful federal government squeezing an important but vulnerable religious ministry started by an immigrant who fled an abusive government in Cuba,” said Laxalt.  “I remain committed to protecting our state and its inhabitants from the detrimental effects of federal overreach and abuse of power. Ministerio Roca Solida is simply asking for its day in court to argue all of its constitutional claims. Nobody should have to give up one constitutional right just to have its other constitutional claims heard.”

Roca Solida sued the federal government for violating its First Amendment rights, due process and property rights, as well as for damages from the flooding after the government diverted its stream. The federal court interpreted federal law as forcing the ministry to choose between its property takings claim or its other claims. The state of Nevada’s amicus brief urges the Supreme Court to reaffirm that vindicating one constitutional right should not require forfeiting other rights.

To view the filed friend of the court brief, click here.

N&V StaffSeptember 29, 2022
Read More
Scroll for more
Tap
The Supreme Court’s EPA decision, while not all positive, is worthy of celebration
Will nine times be the charm for Big Candy?