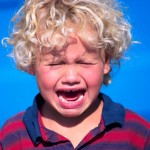 (Chuck Muth) – The primary election is only three days away, and after it results in the third straight election loss for Danny Tarkanian, he might want to check himself into an anger management program. Or buy himself a case of pacifiers.

Danny’s reputation for losing his cool when he doesn’t get his way is well known and well earned. Remember that snit fit he threw after his joint appearance on the Alan Stock Show on KXNT last March when Alan gave Sue Lowden the last word because he had allowed Danny to go first?

Well, the “John McEnroe of Politics” struck again last night at my monthly First Friday Happy Hour event at Stoney’s in Las Vegas. Here’s how entertainment columnist “Norm!” reported on the incident in his column this morning:

Danny Tarkanian and KXNT radio talk show host Alan Stock were involved in an altercation Friday night at a Republican gathering. Tarkanian in an e-mail to Review-Journal political reporter Laura Myers acknowledged the incident, saying that Stock raised his voice when Tarkanian said he was leaving because “they would not let me speak early.”

The outburst occurred at Stoney’s Rockin’ Country on Las Vegas Boulevard South. Tarkanian, a Republican U.S. Senate candidate, said Stock accused him of lying. Tarkanian said he tried to calm Stock down and put his arm around him, but Stock yelled louder, “Don’t touch me.” “I then left Stoney’s,” Tarkanian said.

Not surprisingly, Danny’s account is less than truthful, but I’ll get to that in a minute. But first, Norm! updated his story in a series of Twitter posts later this morning:

Here’s more from the Danny Tarkanian-Alan Stock dustup Friday in front of a large G.O.P. gathering and U.S. Senate hopefuls. A source who attended the event said Tarkanian asked to speak 1st because he had a commitment to throw out first pitch at the LV 51s game. Tarkanian grew agitated and was seen trying to grab the microphone out of Stock’s hand. “It’s a totally different version from what Tarkanian said in your column today,” the source said.

New source: “The story is factual in the fact that there was an altercation in which Danny placed his hand on the shoulder of Stock. However, the altercation was not over whether Stock would allow Tarkanian to speak…rather it was the order in which they were slated to speak. Danny wanted to speak first and Stock would not allow him to change the pre-selected random ordering. Stock told him that the order was set and Danny was supposed to go 3rd and began to walk towards the stage. That is when Danny grabbed Alan and the altercation erupted.”

OK, first, there were no punches thrown. I know, because I was standing right next to Alan when Danny confronted him as Alan and I tried to make our way up to the stage to begin the program at 6 pm. More on that in a minute.

Secondly, here’s exactly what was involved in the speaking matter.

Late last week we decided that our “theme” for this month’s First Friday would be “Last Call” and we’d invite the major candidates running for governor and the U.S. Senate to speak for two minutes each in a final effort to win over voters before Tuesday’s primary.

Karri Bragg, our First Friday “Hostess with the Mostest,” sent email invitations out to Jim Gibbons, Brian Sandoval, Mike Montandon, Sue Lowden, Sharron Angle, Danny Tarkanian, Chad Christensen and John Chachas on Thursday, May 27th inviting them to speak. They were advised to confirm their participation with Heather Kydd who would be substituting as “Hostess with the Mostest” in Karri’s absence (she getting married!)

On Tuesday, June 1st at 3:39 pm, I was advised by Heather that Danny Tarkanian wanted to participate but had to go first. I advised Heather to advise Danny that the speakers would speak in the order in which they responded and confirmed.

At 8:50 pm that night, I received an email from Karri asking me to call Danny’s executive assistant, Judy, because he wanted to go first.

At 9:02 pm I wrote back to Karri: “He can’t. They already tried to get this past Heather…and since I already told Heather to tell them no, I guess they figured they’d try an end-run by going to you. Please inform Judy that Danny’s free to call me directly if he wants to discuss this further.”

Danny never called. So as far as I was concerned, he just decided not to participate.

Danny did show up at Stoney’s and started working the crowd right around 5 pm when the doors opened. We saw each other numerous times over the next hour and I said hello to him and to his wife Amy who was with him. At no time did he say a word about speaking.

At around 5:45 pm, Alan Stock, host of KXNT’s afternoon news show and monthly First Friday master-of-ceremonies got a call from KXNT’s program manager while on his way to the event. Apparently Danny had complained to a KXNT employee who was already at the event and claimed that Heather Kydd wouldn’t let him speak. The KXNT employee called the program manager back at the studio…who then called Alan to give him a heads up.

Danny’s complaint, of course, was an outright lie. He was never told he couldn’t speak; he was simply told he couldn’t get special treatment and that if he wanted to discuss further, to talk to me directly. Again, he never said a word to me.

Which was total bull…well, you know.

Anyway, Danny apparently realized what a little scene he was creating in front of so many witnesses, so as Alan tried to leave him and walk towards the stage with me to start our program, Danny grabbed him forcefully and tried to move him towards the front door, I guess in an effort to talk to him outside where there wouldn’t be a crowd of witnesses.

Alan broke free of Danny’s hold and he and I walked up to the stage as Danny stormed off in a huff.

All because Danny was demanding special treatment and because he was too big of a baby to talk to me directly even though he had PLENTY of chances. Instead he tried to get everyone else to extend him the pampered prince treatment he feels he so royally deserves, I guess because his last name is “Tarkanian.”

Stock never raised his voice; Danny did. Danny didn’t tell Stock that we wouldn’t let him speak early; he lied to Stock and said we wouldn’t let him speak at all. Stock never accused Danny of lying; he merely assured him that he absolutely could speak. Stock had nothing to do with the speaking order; I did. Danny didn’t try to calm Stock down; he tried to strong-arm him away from the crowd. And it wasn’t Stock who was yelling; it was Danny.

As a closing note, if it’s true Danny had to leave early because he wanted to throw out the first pitch at the 51s game, the game wasn’t scheduled to start until 7 pm…and Cashman Field is only about 15-20 minutes away from Stoney’s. So if he really wanted to, he could have spoken last – been finished by 6:20 at the latest – and still made it to the baseball game with plenty of time to spare.

Instead he opted to throw a hissy fit just because he didn’t get his way.

Who said he’s not senatorial material?

P.S. I understand Norm! spoke with Alan Stock today and will have more about this in his column tomorrow.