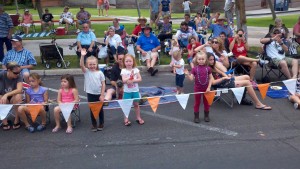 (Lori Piotrowski) – It has been more years than I care to publish since I was in a parade, but march I did along with the Boulder City Republican Women in Boulder City’s Damboree parade. In my last experience, I played my clarinet and wore a band uniform made for somebody two inches shorter and 20 pounds heavier. On the Fourth, Kathy McGeHee-Hansen and I carried the BCRW banner in front of our club float and got to wear our own clothes!

The small-town atmosphere was infectious, and our position on the street gave us a great view of Boulder City’s residents in their festive attire.

Many of the children, boys and girls alike, had seen the same hairdresser. One small fellow sported a 5-inch Mohawk, striped red, white, and blue. Many girls had cornrow braids in star shapes, also spray painted in patriotic colors, with a little glitter thrown in for fun. Patriotic T-shirts, sunglasses, and flags in all shapes and colors were waving as we passed down Nevada Way. 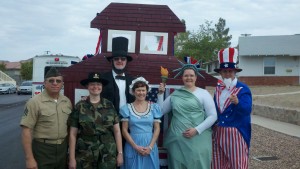 Members of Senator Dean Heller’s campaign, Brittney Sandler, Ed Quinn, Jack Finn marched with our club, helping members Ellen Koczka, Sara Weber, Joyce O’Brien, and Linda Bronstein distribute American flags to children and adults. One flag recipient remarked to club president Linda Bronstein that the Republican flags were larger and better than those handed out by the Democrats several parade positions ahead of us!

Spectators were entertained by the Las Vegas M.O.B. (Masters of Baton to the uninitiated), Vegas Cheer Authority (VCA) groups with sparkling silver pom-poms, Girl Scouts celebrating their 100th year anniversary, and an assortment of local businesses. Bringing up the rear were the water works—float and parade entrants dousing spectators with water from hoses, water cannons, and balloons. This is when spectators really got involved with their own water-filled munitions.

After the parade, residents mingled in Broadbent Park, eating burgers and dogs grilled on site by the local Elks Club, playing games, spraying silly string, and visiting booths. Dr. Heck and Dr. Hardy were on hand to greet well-wishers at their booth while volunteers passed out bumper stickers, registered voters, and passed out literature to the interested.