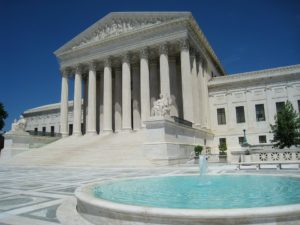 With a thoughtful and succinct speech Monday, President Donald Trump nominated Judge Brett Kavanaugh to succeed retiring Supreme Court Justice Anthony Kennedy.  With the most experience of the people Trump considered and a stellar textualist and originalist record, he was considered by many as the front runner for the nomination.

Kavanaugh, 53, is a federal appeals court judge appointed in 2003 by President George W. Bush and confirmed in 2006 by a senate vote of 57-36 to the D.C. Court of Appeals.  Before that, he worked for the Bush campaign during the Florida recount in the 2000 election and subsequently in Bush’s White House.

Earlier, while working for Independent Counsel Kenneth Starr in investigating President Bill Clinton, he wrote key memos laying out the broad grounds for presidential impeachment and limits on presidential investigations.

Following undergraduate and law studies at Yale, he clerked for Justice Kennedy.  He’s married to his wife Ashley, and they have two daughters he coaches in basketball.  Kavanaugh has run the Boston Marathon twice, and he regularly runs 5K races.  He is Catholic.

Bush said, “Brett is a brilliant jurist who has faithfully applied the Constitution and laws throughout his 12 years on the D.C. Circuit.  He will make a superb Justice of the Supreme Court.”

The New York Times said, “his selection will galvanize Democrats and Republicans in the months before the midterm elections.  Moments after the announcement, the Senate Democratic leader, Chuck Schumer of New York, declared, ‘I will oppose Judge Kavanaugh’s nomination with everything I have.’”

Schumer, in total fealty to his party’s kamikaze left wing, would oppose any nominee Trump proposed.  Forget meeting with the nominee before making this statement.  It’s all about the soundbite for Democrats desperately trying to find an issue this election cycle.

However, moderate Democrat senators Joe Manchin of West Virginia, Joe Donnelly of Indiana, and Heidi Heitkamp of North Dakota – endangered, running in states won by Trump and who voted to confirm Justice Neil Gorsuch – will certainly have the decency and good sense to hear from Kavanaugh.

We believe Kavanaugh is exactly the kind of textualist and originalist justice needed on the Supreme Court.  In his Monday remarks accepting the nomination, he stated he would “keep an open mind in every case”, but also that judges “must interpret the law, not make the law.”

Recently, in National Review, he was praised by Sarah Pitlyk, his former law clerk: “Judge Kavanaugh has a clear, consistent, and rock-solid record on the issues that matter most to social conservatives. He has repeatedly taken conservative stands and fearlessly defended his textualist and originalist philosophy.”

And, “As I can say with confidence from having worked with him closely in chambers for a year – and benefited from his mentorship for a decade – he is a good and decent man who will never waver in the face of pressure from any quarters. He is exactly what constitutional conservatives should want on the Supreme Court.”

Politico quoted Elizabeth Price Foley, Professor of Law at Florida International University, thus: “Judge Brett Kavanaugh’s nomination to the Supreme Court is likely a turning point for constitutional interpretation.  His commitment to textualism and originalism will help the Court restore power to the political branches and consequently, the American people.”

Further, “Unlike activist judges who believe ‘law is politics’ and feel empowered to impose their subjective preferences on the country, judges such as Kavanaugh believe strongly that law is the end product of politics, not a continuation thereof, and the judiciary’s duty is to enforce the law as written.”

The Washington Examiner reported, however, that Kavanaugh “is drawing criticism for his interpretation of the Fourth Amendment.”  He concurred with D.C. Circuit Court colleagues to not hear a case involving government collection of millions of phone call records.

George Washington University law professor Jonathan Turley said that “reflects a sweeping view of national security as an exception to core protections. … Kavanaugh went out of his way to position himself at the outer limits of executive power.”

A few on the fringe right and nearly all on the left will oppose him.

We think he’s ideal and Trump has delivered on his promises on perhaps the most important matter.