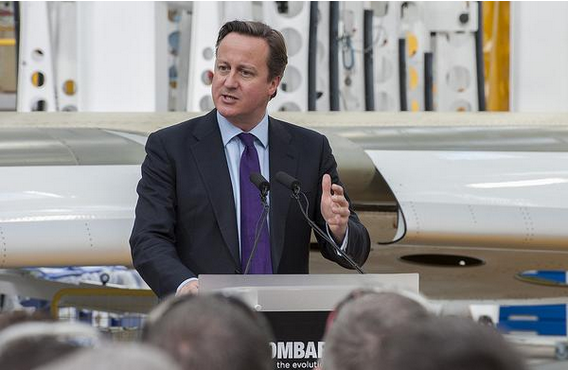 (Photo from the Prime Minister’s Office)

Announcing the tax pledge in an April 29 address, Cameron asked the voters:

When you’re standing in the polling booth, ask yourself: on the things that matter in your life who do you really trust? When it comes to your tax bill, do you trust the people who have taxed you to the hilt when they were in power and still haven’t come clean about the taxes they want to increase next time round? Or do you trust the Conservatives, who have cut income taxes for 26 million people and who will cut your taxes again next time.

A month out from Election Day, Prime Minister David Cameron’s campaign was widely deemed to be faltering – the Conservative Party hadn’t overtaken the centre-left Labour Party in the polls, and there was a feeling that a strong, believable case needed to be made to convince a skeptical electorate that his Government deserved re-election. A key announcement was the Tax Pledge – a pledge not to raise the key taxes on ordinary, hard-working families in the UK. This Pledge had significant cut-through, because it proved to voters that the Conservatives’ plans for taxation were real, and concrete, as opposed to the illusionary promises from the other parties. Now the Prime Minister has an overall majority in Parliament, this Pledge will become an important part of Britain’s fiscal debate. It’s certainly works for taxpayers in the US, and it’ll work here in Great Britain.

This British election was supposed to revolve around post-Thatcher worries about income inequality and resentment against the rich. A recent study by the London School of Economics found that 62 percent of Britons felt inequality had reached    unsustainable levels and that 74 percent believed the rich should pay more taxes. Bart Cammaerts, the author of the study, wrote that it showed the country moving toward  ‘a renewed politics of redistribution.’

Goodbye to all that, for this election at least. If anything, British voters were motivated to turn out in support of Prime Minister David Cameron’s last-minute support of a version of America’s famous anti-tax pledge. Just last week, Cameron pledged that if the voters gave him a second term, he would push legislation blocking any increases in Britain’s national-insurance, income, or value-added taxes (the lattermost, a form of sales tax). ‘We know it’s your money, not government money. You’ve worked for it, you’ve earned it, you should be able to keep it,’ he told voters.

The original version of this article was published at ATR.org.

Americans for Tax Reform is a non-partisan coalition of taxpayers and taxpayer groups who oppose all tax increases. For more information, please contact Katie McAuliffe at kmcauliffe@atr.org or visit its website at www.ATR.org.

N&V StaffOctober 4, 2022
Read More
Scroll for more
Tap
Sticks and stones
Fiore: If you can’t walk the talk, I will hold you accountable