Campus conceal and carry: Self-defense is a right

Campus conceal and carry: Self-defense is a right
N&V Staff 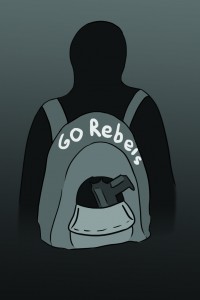 (Mark Ciavola) – Although UNLV claims to be a “gun-free zone,” it is also an open campus, and there is no way of knowing when a concealed firearm has entered the premises.

Nevada state law has banned guns from being brought onto any Nevada System of Higher Education (NSHE) property since the 1980’s. However, with the way legislation seems to be heading, that may be about to change.

In order to obtain a CCW permit in Nevada, all applicants must be 21 years of age, must not have been convicted of any felonies, must have passed a background check, must have completed and passed a training class taught by a certified instructor, must pass a target test and more.

The loudest voice opposing concealed carry at UNLV has come from UNLV’s Police Chief José Elique, whose biggest concern is the safety of this city if more guns are introduced on campus.

In June 2011, Elique spoke with KNPR’s State of Nevada, and stated that campus carry legislation is, “well-intentioned, feel-good legislation,” that is both, “unnecessary and impractical.” He also explained that UNLV is, “a very safe campus.”

While that’s all well and good to know, it is troubling that Elique can’t guess as to how many guns enter this campus daily or who is bringing them.

“I think the belief that absolutely no one ever brings a weapon onto campus under the current restrictions is naïve,” said freshman Republican Assemblyman Derek Armstrong, a graduate of UNLV and Boyd School of Law.  Armstrong points out that CCW permit holders visiting UNLV, students or otherwise, are forced to leave their weapons in vehicles parked off-campus where they are more likely to be broken into.

Yet Chief Elique’s primary opposition, as articulated in virtually every campus carry interview he has given, is that in an active shooter scenario his cops might shoot the good guy. “Friendly fire,” he called it.

In comments made to the Las Vegas Sun in February 2013, Elique said, “We’re not going to go around asking, ‘Do you have a license?’ We might shoot you.”

Active shooter scenarios, while tragic, are extremely rare, but students who have earned their CCW permits are more concerned with self-defense than scare tactics.

“We need concealed carry for everyday acts of violence and crime, especially for females for whom firearms are the great equalizer,” said Zachary Guymon, president and co-founder of UNLV’s Students for Concealed Carry.

“Current law only stops law abiding people from carrying on campus,” Guymon said. “If you’re determined to murder, rape, terrorize and assault, would the possibility of a gross misdemeanor really stop you?”

It’s not a stretch to understand why any police chief would advocate for there to be less guns on campus, but that wasn’t always the case for Elique.

As Director of Security and Public Safety at City University of New York, Elique transformed a security force of part-time guards into what the New York Times referred to as, “a cadre of 600 full-time, professional ‘peace officers’ who dress like police officers.”

He also oversaw the SAFE team, a group of 33 specially-trained armed guards who monitored student protests and activism, and according to the New York Daily News, “helped compile and circulate lists of arrested activists-complete with addresses, social security numbers, grade-point averages and race.”

Elique’s office rejected a request for comment as, “all requests for media interviews on this topic within the NSHE system are being handled directly by the system office.” That directive came from NSHE’s Executive Vice Chancellor and former Democratic Attorney General Catherine Cortez-Masto, who isn’t exactly impartial.

But is how Elique feels about this campus reality? Is UNLV, as he said it, “very safe?”

In UNLV’s most recent Annual Security Report, there were 22 instances of domestic violence or stalking reported in 2013. The report lists five forced sex offenses for that year. There was only one reported in 2012. There have been six sexual assaults reported so far this academic year. But what about the neighborhoods surrounding UNLV?

Just last week, three men were shot at the Siegel Suites apartments, which are across the street from the Rebel Place apartments and only less than a half mile from UNLV. That entire area is teeming with violent crime, especially beyond East Twain Avenue in the direction of downtown.

“When you look at all of the sexual offenders registered around campuses, it’s scary,” Fiore said. “It’s like a sexual predator hub around these campuses to the point where you definitely don’t want your children going there.”

It is illogical to believe that the responsibility level of a CCW permit holder changes when they leave Café Rio and cross Maryland Parkway to enter university property. It’s an arbitrary line.

Whether a student walks, bikes, shuttles or drives to campus, the current policy calls for them to leave their gun at home because they do not have a vehicle to leave it in before entering campus. A campus policy that robs students of the ability to defend themselves for the duration of the day is unacceptable.

“When they tell a CCW permit holder that they can’t have their weapon, we listen because we don’t want to jeopardize our permit or break the law,” Fiore said. “The only thing that does is make us vulnerable [and] takes our ability to defend ourselves away.”

The fact remains that UNLV can neither guarantee the safety of its students nor prevent anyone from bringing a gun on campus. Therefore, it is my express opinion that students be allowed to defend themselves.

We will know soon if campus carry legislation will be headed to Governor Brian Sandoval’s desk.

Until then, I’m not comfortable knowing that my safety depends on the response time of the UNLV Police. Can they crash through the student union windows on horseback to save me in time?

– This article is republished from The Rebel Yell. The Rebel Yell is UNLV’s Student Newspaper. For more information, please visit www.unlvrebelyell.com.