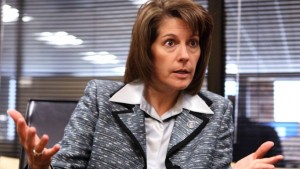 (Brian Baluta, Dr. Joe Heck) During career of six-figure jobs in government and politics, only bottom line Cortez Masto has looked out for is her own, at taxpayers’ expense

After spending 22 of 26 years using her political connections to move from six-figure juice jobs to elected office, apparently someone needs to tell Catherine Cortez Masto it takes more than a photo-op and some vague and tired talking points to make her a champion of small business. As a follow up to her “ill-fated trip to rural Nevada,” Cortez Masto was in Reno Tuesday for an ill-fated launch of a very small “small business advisory council.”

“Dr. Joe Heck owned and operated a small business and created jobs, while the only connection Catherine Cortez Masto has had to the private sector is the taxes that padded her bank account for more than two decades,” said Heck spokesperson Brian Baluta. “One campaign stop doesn’t hide the fact that throughout her career Cortez Masto has been a ‘loyal Democratic foot soldier’ for policies like Obamacare that punish small businesses and halt job creation.”

Following eight years of the Obama economy, Nevadans are struggling with stagnant wages, reduced hours, and decreased economic opportunity. The policies of this administration, from the Affordable Care Act to the Dodd Frank financial reform legislation, have hurt economic growth and made it more costly for businesses to expand and add workers. As a former small business owner, Dr. Heck has seen first-hand what it takes to run a business, make a payroll, and create jobs.

Unlike Cortez Masto, Dr. Heck actually is a champion of Nevada’s small businesses. In the U.S. House, Dr. Heck introduced and supported successful legislation to:

Dr. Heck also introduced legislation that will create an estimated 1.2 million jobs and add as much as $860 billion to the economy by boosting international travel and tourism to the United States and popular tourist destinations like Nevada while strengthening our national security.

He is endorsed for U.S. Senate by the National Federation of Independent Business as someone who understands the struggle of small business owners.

During her one opportunity to stand up for small business as attorney general, Cortez Masto decided instead to side with her political godfather Harry Reid. In March 2010, Cortez Masto violated state law and refused to follow Gov. Gibbons’ directive to join 14 other states that filed a legal challenge to Obamacare.

The Reno Gazette-Journal reported Cortez Masto’s refusal to follow Gibbons’ directive violated state law. Ex-Attorney General Brian Sandoval could not think of another instance in which an attorney general refused to represent a governor in a case. State law requires the attorney general to file a lawsuit when directed by the governor. State law also prohibits the governor from using any other lawyer to represent the state. That set the stage for a difficult legal tug of war on the issue… (Sandoval) said the lawsuit is necessary to protect states’ rights. He said he also was surprised by Masto’s decision. “I’m not aware of an attorney general ever declining to represent the governor in a case,” he said. “This is an issue of first impression, as far as I know.” (Reno Gazette-Journal, March 31, 2010)

Cortez Masto has spent 22 of 26 years working in political and government jobs and running for elected office. She has not worked in the private sector since 1995.