CCSD Schools Should Work On Budgeting Before Demanding More Money 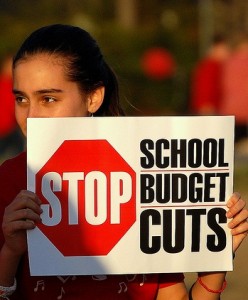 (Ryan Hamilton) – The educational institutions in Nevada are arguing again that they are underfunded. The Teacher’s Union is advocating for a margin tax on businesses, which, thankfully, is not yet on the ballot. In November, however, the school district will ask you to approve an increase on property tax that will allow them to finance capital improvements on schools from new roofs and plumbing to technology enhancements.

I don’t think anyone that has come out of one of the district’s older schools can say that the buildings are in pristine condition — they’re not. It is likely true that these repairs need to be made and that some of the facilities at schools are in need of modernization. The reason these schools are in such poor condition, the school district argues, is because the district does not receive sufficient funding from the state to make the necessary improvements. That’s just not true.

The advocates for the tax argue that it is small — about the price of a fast food meal once a month for the next six years for someone who owns a house of $100,000. What sort of greedy person, they imply, would object to less than $7 a month to make sure the children of Clark County receive education in updated facilities?

The problem isn’t that someone objecting to this tax increase is greedy — they’re either onto the lies of omission told by the district and its representatives in order to justify this tax, or, even more likely, they’re honestly not in a financial situation to be able to afford even a dollar more in taxes each month. This is particularly true of retirees, who live on a fixed income, and college students or the just-graduated, who often leave college with a negative net worth because of the exploding costs of a university education and the loans necessary to finance it.

On top of all of the expenses they already pay, including taxes which fund the school district to the tune of $3.3 billion a year, another $7 on top of their rent is often out of reach and may mean the difference between going hungry for a day or not.

I concede that many people may be able to afford this without going hungry, but taxes shouldn’t be justified simply because people can afford to pay them. A lot of people can afford to pay a lot more in taxes, but just because that is true doesn’t mean that they should pay more. It is more important to decide whether those taxes are necessary before arguing that people can, and therefore should, pay them.

In the last 14 years, the school district has spent $1.8 billion on school repairs, which was financed by a 1998 bond issue. When that measure went to the ballot, you can be sure that the district argued that it would raise all it needed to completely overhaul the system. The problem with bureaucracies is that they are never incentivized and rarely forced to live within their means. That’s why, here in 2012, we’re being asked to pony up more money for the same thing we have just spent $1.8 billion on.

The statistic you’re about to read is staggering. It alone is sufficient to prove that the problem isn’t resources but management. Since it opened in 1974, Bonanza High School has received more than $28 million in improvements and repairs — roughly $8 million every decade. This figure is not adjusted for inflation. Assuming major improvements started 10 years after the school was built, it means the school has received about $10 million every decade. That amount went a lot further in 1984 and 1994 than it does today.

Since the 1970s, funding for public schools has exploded — we spend, adjusted for inflation, more than 125 percent more today educating a child than we did in 1969. We also have more than 50 percent more staff per student. The achievement rates for high school students during that time have remained constant — meaning there has been no translation of money into academic achievement.

A lot of change has happened since the 1970s, and schools aren’t to blame for all of it. The alpha and omega of school performance for children is the involvement and care shown by any given pupil’s family at home. If academics is a priority for a parent or guardian, it is more than likely to show up in a child’s performance.

School districts — and teachers in particular — get blamed a lot for poor test scores and static academic achievement in spite of funding. Some of the blame is properly placed on teachers and unions who refuse any form of meaningful evaluation and let the administration hire and fire teachers based on seniority rather than performance. They need to accept that and make changes.

Some of the blame is misplaced on schools and teachers because schools have allowed, and even pushed, to become the clearinghouse for all things to do with a child. Kid is fat? Must be the food at school. Kid isn’t learning? Kid is misbehaving? The school can fix that. We just need more money to improve performance.

The crucial and missing variable, which is far more important to whether or not a kid becomes obese, educated or a delinquent, is how their family decides to react to these variables. If districts weren’t so interested in getting their hands on money by claiming they can take care of the whole child if we fund the schools more, they wouldn’t receive near the amount of blame that they do.

Also, we’d likely be able to have a discussion about single parenthood and other issues which have an enormous impact on the life of any student, and make some progress toward fixing that. But that requires honest discussions about budgeting and what schools can and can’t do. The moment a school admits it isn’t the end-all, be-all of a student’s life, a lot of arguments for budgeting and salary vanish.

Here in Nevada, our schools are well financed and poorly budgeted. We have a housing crisis and one of the nation’s highest rates of unemployment and underemployment. The cost of gas is at a record high for the state, likewise the cost of tuition. The cost of food is rising. It is time that we started asking the school district to be responsible with our money so that they don’t have to keep demanding more of it.

There are two certainties in this argument: First, the school district is not underfunded. It is mismanaged. Second, the average Nevadan can’t handle the burden right now. It’s awful enough that a Nevada taxpayer must finance the mechanisms of raising his or her own taxes. School district employees appear on the radio to justify the tax increase and their lawyers draw up the plans while teachers unions, whose funds originate with the taxpayer, are financing the drive for the margin tax. We shouldn’t have to pony up more money to meet the increasing demands of a fiscal black hole with so little accountability.