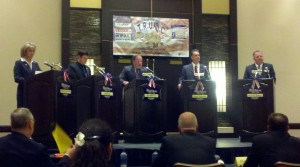 (Lori Piotrowski) – Tuesday evening’s debaters (five CD4 Republican candidates) met at Aliante Station Casino and Hotel to spread their ideas. But they mostly failed at that effort by spending time repeating sound-bite ideology that served little to help attendees make up their minds. That may not have mattered as it looked as if each candidate had brought their own cheering section. In fact, Tarkanian’s army took up two rows, each wearing a red T-shirt sporting that square mobile app logo that the tech savvy could photograph and save on their mobile devices.

Sharron Angle, also a sponsor of the debate, gave a few opening remarks, an invocation, and led the audience in the Pledge of Allegiance before turning the podium over to Mitch Fox.

Fox thanked the audience for attending, saying, “This is a key race. The political spotlight will be on this primary more than any other race in Nevada. This is a big district, a new district, and that’s why the debate tonight is so critically important.”

Danny Tarkanian definitely held the spotlight when he spoke. He was prepared, he knew his positions, and he got his point across quickly. It was obvious that he had given thought to his positions and honed his responses to fit the time limitations. To some, it seemed too polished, but it may be what is needed to KO Horsford.

The other candidates did not shine so much, and some not at all. State Senator Barbara Cegavske’s closing remarks mimicked her opening comments, leaving one wondering whether she could have used some of that final two-minutes to reiterate or clarify an earlier answer or two. She seemed ill-prepared and several times had difficulty understanding what the panelist was asking.

Kiran Hill, a former Marine who has worked in the State Department, was adept at quoting Ron Paul ideology on taxation, the Federal Reserve, and foreign policy, much to the pleasure of Paul supporters in the audience. He was the only candidate to respond negatively to Stock’s lighting round question Would you support foreign aid to Israel? Hill was the only candidate, however, to get a chuckle out of the audience. Schwartz had mentioned the Osprey military aircraft as a project that should be cut. Turning to Schwartz, Hill said, “The Osprey is awesome—you’re wrong.”

Dan Schwartz, a businessman and author, knew his ideas and seemed more moderate. He is a firm believer in climate change, but didn’t have a specific plan to address the issue. His response to the lightening round question about striking down the Brady Bill was a No. In fact, this was the only No from the panel. He also hasn’t signed the No Tax Pledge.

(Note: Cegavske hasn’t signed the pledge either, which raises the question as to why she won’t do it when she keeps talking about her record of voting No to tax increases.)

Kenneth Wegner seemed at ease. Wegner has been around and he knows his positions. The problem is that he is unable to articulate them in a short time frame. Repeatedly, he told panelists and the audience to go to his Web site and read his pledge.

This, in my opinion, is the same as a non-answer. If you don’t have your elevator speech ready, you can’t expect listeners to go to your Web site and find the answer for you.

Overall, attendees learned some things about the candidates, but also some things about panelists. Such as, panelists get very long-winded and sometimes you just can’t decipher what the question is, or even if there is one. In fact, the moderator interrupted some of these monologues with that very question: Is there a question in there?

Attendees also participated in a straw poll, but as of this writing, the results haven’t been posted. This article will be updated when results are in.