(Thomas Mitchell) – Everybody knew the networks were practicing checkbook journalism, but who knew the checks were so big?

Paul Sperry, writing in Investor’s Business Daily, reports that Republican presidential candidate Ben Carson was paid nearly half a million dollars by Fox News until he announced his candidacy.

The liberals at CNN do it too, contracting with Obama adviser David Axelrod to work as a commentator.

Who knows what made NBC think Chelsea Clinton was worth $600,000. Why that’s as much as three speeches from either of her parents.

The Society of Professional Journalists calls such checkbook “journalism” unethical for many good reasons — the foremost is that money corrupts and paying for information or sources corrupts journalism.

The SPJ Code of Ethics admonishes: “Be wary of sources offering information for favors or money; do not pay for access to news. Identify content provided by outside sources, whether paid or not.”

The SPJ warns about getting into bidding wars, which, as a former editor with a strict budget, I can appreciate, even if the networks do not.

Here are a few other SPJ reasons why checkbook journalism is vile:

First, paying for information immediately calls into question the credibility of the information.

Creating a market for information that sells also raises the possibility that entrepreneurs looking to make money will create their own news, staging or inventing stories to attract the big checks.

Second, paying for information creates a conflict of interest. By writing a check for an interview, the journalist now has a business relationship with the source. Asking tough questions, examining the motives, weighing the credibility of a source — all of these journalistic functions become intricately more complicated when the source is someone receiving money for a story.

And third, once a media outlet has paid for information, it is less likely to continue to search for the details of the story for fear it might uncover conflicting information.

A source who chooses to tell a story and tell it exclusively should want to choose the reporter who has the clearest record of demonstrated competence rather than the one waving the largest check.

While it is true that journalism is a capitalistic endeavor and money must be made, being first and being exclusive should never be the primary motive of journalists. The primary motive always should be an accurate report.

There is a market for credibility. Once you’ve sold that, you’ve entered the world’s oldest profession. 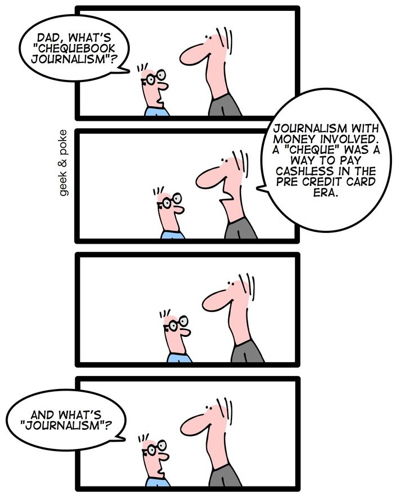