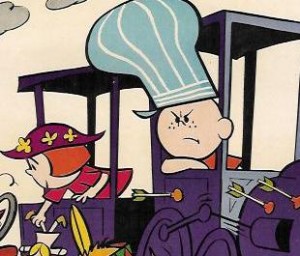 Democrat Erin Bilbray-Kohn’s congressional campaign against Republican Rep. Joe Heck has been clickety-clacking down the tracks billowing big black smoke while teetering back-and-forth on the edge of derailment since it left the station last summer.

On Friday – the day traditionally used to announce embarrassing campaign developments – the “Little Campaign that Couldn’t” finally jumped the tracks…and engineer Brad Mayer was booted off the Bilbray & Pelosi Express.

No, no. The “official” explanation is that after over six months of heading up one of the top five Democrat congressional campaigns in the nation, Mr. Mayer suddenly “discovered” that he didn’t want to run a federal race any longer because he couldn’t keep up with the intense, 24/7 pace of such a campaign.

Does anyone really expect us to believe Brad didn’t know what he was getting into and jumped off the train voluntarily? Puh-lease.

Despite being a professional campaign trainer for over a decade, Bilbray-Kohn has been a horrible candidate herself on the campaign trail.

Her only real media appearance on a little-watched local community affairs television show last fall was a disaster, as she accused Rep. Heck – a doctor and colonel in the United States Army – of being “un-American.”

Her political attacks against her opponent on all manner of issues have been so lame, so false and so off the mark that even some of southern Nevada’s most liberal reporters, columnists and bloggers have called “bull-$#%!” on her.

And even though she has no primary race to contend with, Bilbray-Kohn continues to only speak in front of friendly audiences – Democrat clubs, unions, abortion rights advocates and “Birkenstock-wearing, tree-hugging, clove-smoking vegetarians.”

Plus, despite setting the bar so low that an earthworm could hop over it, the campaign is clearly falling far short of fundraising expectations for such a high-profile, nationally-watched race.

As such, it would appear that Sen. Harry Reid – desperate to take out Heck to derail any possibility of Heck challenging Reid himself in 2016 – decided it was time for an intervention.

Communicating the message and fundraising are the candidate’s job, not the campaign manager’s. But you can’t fire the candidate…no matter how much you might wish you could. Not this far down the road anyway.

So you have no choice but to can the campaign manager even though you allow him to retain a shred of his reputation and dignity by letting him say he “quit.”

In Mayer’s place, Reid has put longtime Democrat Party operative and “guru of Nevada politics” Rebecca Lambe – rumored to walk on water, heal lepers and raise the dead – in charge of cleaning up the Bilbray-Kohn for Congress train wreck.

If Lambe the Miracle Worker can’t get the Little Campaign that Couldn’t back on track, then maybe they really should have tossed the candidate and not the campaign manager off the back of the caboose.