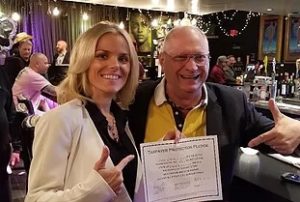 You can read the official endorsement statement by clicking here

For more information on Aimee, click here to read our “20 Questions with Aimee Jones” e-interview on Nevada News & Views.

The full list of 2018 endorsed candidates will be maintained here

Has Anyone Seen the Old Steve Sisolak?

In an increasingly desperate effort to turn back the threat to his Democrat gubernatorial campaign by uber-liberal challenger Chris Guinchigliani, Steve Sisolak is now running a new television ad that turns his back on Nevada’s law-abiding gun owners and pledging to prevent teachers from defending their students if a crazed gunman storms their classroom.

Let me predict now that when the dust settles on June 12th after the primary election votes are tallied that Chris G will be the Democrats’ gubernatorial nominee and Mr. Sisolak is going to be wondering not only what happened to his multi-million campaign warchest, but his dignity, reputation and integrity as well.

Me, Harry and the Gun Grabber

Just before the program began I was asked to scoot over one seat in the front row for the gentleman who was to introduce Mr. Becerra…

I’m not sure Sen. Reid and I have ever agreed on a single major issue, but we’ve never been disagreeable with one another.  And we had a very amicable chat before the program began.  And let me tell you, the man is as sharp and plugged in to the political scene in Nevada as he’s ever been.

As for the stacked-deck forum itself, I was able to get a question in and asked Mr. Becerra if the folks in the room should have the right to be armed just in case a crazed gunman walked in and started shooting up the place despite it being located on a “gun-free” campus.

Naturally, he never actually answered the question and instead danced around it in a way that would have made Fred Astaire jealous.  Sad.

“I am a philosophical conservative. The constitution is what made our country the greatest.  I will fight to keep those principles intact.” – Republican Nevada Assembly District 35 candidate Aimee Jones