(Newt Gingrich) – One of the news media’s most destructive habits is to analyze every issue in terms of the politics–who’s up and who’s down–even when grave matters of life and death are at stake.

This is why, when a close American ally addressed the U.S. Congress last week about the potential genocide of his country, the only part the media wished to talk about was whether the speech personally irritated President Obama and whether Speaker Boehner had shown sufficient regard for the President’s feelings. 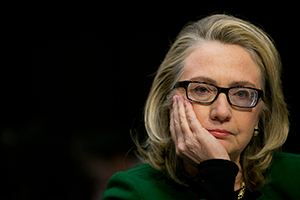 Two other converging stories this week, however, present serious national security threats that are largely being ignored by a news media engaged in political handicapping. Both involve Hillary Clinton, universally seen as the Democrats’ most likely nominee for president.

First came the news that the Bill, Hillary & Chelsea Clinton Foundation accepted millions of dollars in donations from foreign governments–including governments in the Middle East that sponsor and promote radical Islamism–while Hillary Clinton was Secretary of State.

What’s the problem with Secretary Clinton accepting millions from the Saudis? She tells us herself: in diplomatic cables made public by Wikileaks, she noted that Saudi Arabia “remains a critical financial support base for al-Qa’ida, the Taliban, [Pakistani terrorist group] LeT, and other terrorist groups, including Hamas.” She further criticized the Saudi government for taking “only limited action to disrupt fundraising for the…Taliban and LeT-groups that are also aligned with al-Qa’ida and focused on undermining stability in Afghanistan and Pakistan.”

Hillary Clinton’s “ethics agreement” with the Obama administration allowed the sitting Secretary of State to continue raising money from these and other governments around the world, as long as they donated at a similar level to what they had contributed prior to her appointment.

But Secretary Clinton apparently did not constrain herself even to this unconstrained arrangement–which, as theWashington Post describes, “did not prohibit foreign countries with interests before the U.S. government from giving money to the charity closely linked to the secretary of state.” The Foundation accepted $500,000 from the government of Algeria and never submitted it for the required State Department approval. In fact, Politico reports, “there are no indications any Clinton Foundation donations were ever sent to the State Department for approval.”

As I described in my recent speech to CPAC, foreign contributions to prominent American officials and institutions pose a serious national security threat. They present, at the very least, a giant conflict of interest: Presumably the Saudis and the Qataris aren’t donating to the likely Democratic presidential nominee’s personal foundation purely out of altruism.

There was a reason the framers included a clause in the Constitution prohibiting any “Person holding any Office of Profit or Trust” from accepting “any present, Emolument, Office, or Title, of any kind whatever, from any King, Prince, or foreign State.”

It’s because they didn’t want foreign powers trying to influence the loyalties of American officials–nor did they want the corrosive effect of even the appearance of such corruption.

As law professor Robert Delahunty writes for the Heritage Foundation, “[T]he Framers intended the Emoluments Clause to protect the republican character of American political institutions.” He cites Alexander Hamilton’s comment in the Federalist No. 22 that “One of the weak sides of republics, among their numerous advantages, is that they afford too easy an inlet to foreign corruption.” As a result, Delahunty says, “the delegates at the Constitutional Convention specifically designed the clause as an antidote to potentially corrupting foreign practices of a kind that the Framers had observed during the period of the Confederation.”

It’s likely that Secretary Clinton did not accept anything so ornate as the diamond-studded gold snuff box that King Louis XVI gave Benjamin Franklin in 1785 (with Congress’s explicit permission, by the way). Her personal foundation did, however, accept many millions of dollars in cash from even less savory regimes.

As the founders recognized, this is more than fodder for political attack ads. It’s a matter of national security serious enough to include in the Constitution.

Which brings us to the former Secretary of State’s other misjudgment with serious security implications, first reported this week by the New York Times and theAssociated Press. For her entire tenure as Secretary of State, Hillary Clinton used a non-government, personal email address for all of her official business. Stunningly, the address was connected to an email server located at the Clintons’ home in Chappaqua, New York.

Aside from the obvious and inexcusable ethical implications of this decision–a decision hard to explain except as an attempt to hide official correspondence that is by law a matter of public record–the server in Clinton’s closet was a grave threat to national security.

Think about it: for four years, all email correspondence with one of America’s highest-ranking officials was housed on a server not protected or monitored by government cyber security experts. Even more alarming, Bloomberg reports, “her consultants appear to have set it up with a misconfigured encryption system, something that left it vulnerable to hacking.”

The opinion of the American Secretary of State is highly sensitive whether it refers to classified material or not. But did any of Clinton’s emails contain classified content? She hasn’t said.

State Department spokeswoman Marie Harf assures us the question is “not pertinent.” It’s unlikely the Chinese and the Russians agreed.

However serious the political consequences of this week’s revelations about Hillary Clinton, the potential implications for the national security of the United States are far greater. We may never discover the extent of the damage. But the misjudgment should be disqualifying for any would-be commander-in-chief.