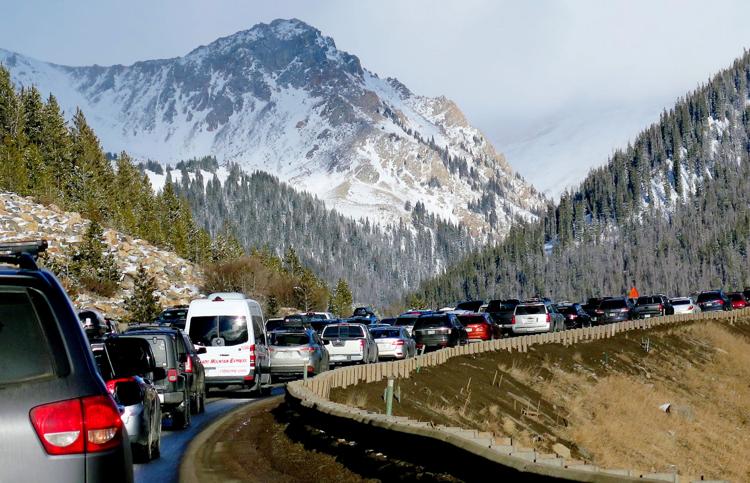 Traffic backs up on Interstate 70 near Silverthorne, Colo., a familiar scene on the main highway connecting Denver to the mountains.
AP Photo/Thomas Peipert

Governors from 24 states including Colorado and Nevada have called on the Trump administration to halt a rollback of stricter vehicle mileage regulations meant to reduce emissions.

The governors signed a pledge to adhere to Obama-era regulations and pledge a national standard in a letter released Tuesday.

California has led the way in opposing the rollback since it was first proposed.

The pledge, called “Nation’s Clean Car Promise,” read in-part: “We must unite to ensure a strong, science-based national standard, in California and across the country, that increases year-over-year, provides certainty for automakers and consumers, reduces greenhouse gases, and protects public health.”

“The Trump Administration believes strongly in a national fuel standard that promotes safer, cleaner, and more affordable vehicles,” a White House spokesman told the Associated Press on Tuesday. “The Federal government, not a single state, should set this standard. We are moving forward to finalize a rule for the benefit of all Americans.”

Among those who signed the pledge were Nevada Gov. Steve Sisolak and California Gov. Gavin Newsom.

“Nevada is proud to join with states leading the charge for a strong national clean car standard and preserving our state’s authority to make decisions on how we can best protect our citizens from vehicle pollution,” Sisolak said. “We are committed to reducing greenhouse gas emissions and cleaner cars are critical to Nevada achieving our state climate goals while saving consumers money and preserving Nevada’s strong economy.”

Last year, Colorado adopted strict emissions standards based on California’s standards in an attempt to pre-empt the Trump administration’s rollback. Those rules require new vehicles sold in the state to average 36 miles per gallon by 2025.

In January, Governor Jared Polis signed an executive order requiring more electric vehicles be made available for sale in the state.

Polis signed aggressive climate action goals into law in May, which aim for 100 percent renewable energy in the state by 2040.

N&V StaffSeptember 14, 2022
Read More
Scroll for more
Tap
What Part of ILLEGAL Alien Do They Not Understand
What Brexit and the EU Can Teach Us About Sugar Trade