Coming To A Business Near You—Occupy Las Vegas!

Coming To A Business Near You—Occupy Las Vegas!
N&V Staff 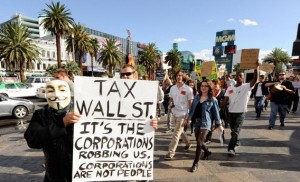 (Lori Piotrowski) – Yesterday was a big day for Las Vegas Occupiers (LVOs)—they had to leave their free lodging. No longer welcome in the parking lot off Tropicana Boulevard, the 5:00 p.m. deadline meant the county had fulfilled its part of the ill-conceived bargain they struck with LVOs.

In November, LVOs had stopped traffic in the downtown area, “forcing” the county to find them a place to congregate. Or, perhaps I should say, live.

Because that’s what they really wanted. A free place to pitch their tent, with the county supplying toilet facilities.

In January, LVOs went door to door looking to camp in yards and driveways of people who were facing possible home foreclosure. How does having a 99%-er hanging around your home make you feel better about your financial situation?

Not to mention the liability should the LVO trip and sprain an ankle.

Even worse is the creepiness factor of having someone you don’t know hanging around your home day after day after day.

Don’t these people have anything positive to do?

These tech-savvy protestors are busy planning their next event for February 29 on meetup.com. And one of their targets is NVEnergy, among other businesses, in a local effort to SHUT DOWN THE CORPORATIONS!

They’d like us all to turn off our power for the day. Now, that would really hurt NVEnergy, wouldn’t it? I think our fingers would be frosty before that power dent was felt.

Now, I don’t agree with all that NVEnergy is doing these days. I’d just as soon keep my current meter without having to pay a monthly fee, thank you very much. I’m not always happy with big banks, like Bank of America, or Chase. And I wish that Wal-Mart didn’t buy so many shoes from China.

But I don’t agree that the unwashed tens of protestors need to be “occupying” any business that supports the American Legislative Exchange Council.

Occupiers argue that ALEC is a “think tank” that “writes model bills” that lawmakers then sign. These occupiers believe that government is run by corporations and they seek to rid government of all corporate influence.

Gee, if that were so, wouldn’t we all be driving Volts by now?

Just so we’re all on the same page here, ALEC was founded in response to individuals who felt that the federal government had strayed from its raison d’etre:

A nonpartisan membership association for conservative state lawmakers who shared a common belief in limited government, free markets, federalism, and individual liberty. Their vision and initiative resulted in the creation of a voluntary membership association for people who believed that government closest to the people was fundamentally more effective, more just, and a better guarantor of freedom than the distant, bloated federal government in Washington, D.C.

The LVOs, who receive their marching orders from Portland Occupiers, seem misguided. Okay, that’s being a bit generous. They’re just plain ignorant of the facts.

And if you’re still not sure who the LVOs are, be sure to check out their May Day activities!

Ron KnechtOctober 13, 2021
Read More
Scroll for more
Tap
Early U.S. Leaders Benefitted From “Unconventional” Schooling
Whitney Houston Had Nobody To Blame But Herself