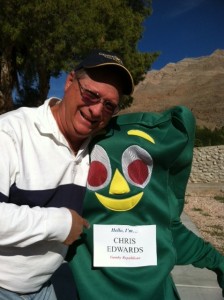 (Chuck Muth) – Contrary to what passes for popular wisdom by “establishment” Republicans, I get it. I understand that majorities get to lead, and that in some districts a strong conservative can’t win because there are considerably more Democrats registered than Republicans.

But those districts aren’t where my beef is.

Indeed, Assemblywoman Michele Fiore – who had the strongest conservative voting record in the 2013 legislative session and ran as a hard-core gun rights/fiscal conservative in her campaign – actually represents a district in which Democrats outnumber Republicans by 732 voters. So if SHE can win a Democrat-majority district, there’s absolutely no excuse for electing wimpy pansies to represent GOP-majority districts.

With that in mind, here’s a list of Republican moderates in the state Assembly who currently (mis)represent districts with a strong GOP voter registration advantage who have earned a Republican primary challenge next year…

Grady, gratefully, is termed out. His is such a huge GOP district that it should never be represented by a go-along-to-get-along moderate Gumby Republican – and hopefully won’t be after next November’s election.

As for the others, the districts they are currently (mis)representing are solid Republican districts. If these moderate Gumbies get taken out in a primary, the seat is going to remain in GOP hands – only with a conservative casting votes in the 2015 legislative session.

In other words, a serious trade-up to a newer, better model.

Stewart, Anderson and Kirner already have credible, viable conservative challengers running against them.

Richard Bunce, a leader of the Ron Paul/Liberty movement, is taking on the “Bug Man” in District 22.

Leonard Foster is prepping for a rematch against Anderson (who is said to be recruiting a moderate candidate to knock off Fiore) in District 13.

And Lisa Krasner is taking on the #1 promoter of the “Kirner Tax” in District 26.

Conservatives are also lining up to run for Woodbury’s seat should she decide to run for another office or retire, with one even talking about challenging Woodbury in the primary should Woodbury decide to seek re-election.

And at least one serious candidate is weighing a challenge to Hickey, who had such a disastrous session this year in his first (and hopefully last) stint as Minority Leader.

If the tea party and liberty movement folks want to have a REAL impact on government, they’ll forget the national scene and focus on these six races where the objective isn’t to just elect more Republicans, but better ones!

Sure, everyone wants to talk about Syria, the NSA snooping and ObamaCare. But for VERY little money and just a little bit of effort, conservatives could dramatically change the make-up of the lower house in the Nevada Legislature next year.

If Nevada is ever going to move back to being not only a red state, but a solid, fire-engine red state, it needs to start building from the ground up. Bring on Conservageddon!