CPAC to Gay Conservatives: Up Yours!

CPAC to Gay Conservatives: Up Yours!
N&V Staff 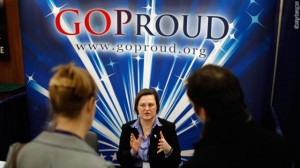 Well, it appears – at least for now – that the homophobes have defeated the homocons.

GOProud is an organization of gay conservatives and their allies who are “committed to a traditional conservative agenda that emphasizes limited government, individual liberty, free markets and a confident foreign policy.” Hardly a radical, anti-conservative mission statement, wouldn’t you say?

However, CPAC – the annual gathering of conservatives in Washington, DC sponsored by the American Conservative Union, the organization that promotes itself as the umbrella group for various conservative organizations and issues – sent a “courtesy” letter this week to GOProud informing them that they were being banned as a sponsor next year.

At least after telling the organization to stick it where the sun don’t shine, CPAC said individual gay conservatives could still buy a ticket and attend the conference. Sort of like banning the NAACP as a sponsor but still allowing “colored” folks to attend.

How gracious of CPAC! I mean, who wouldn’t want to attend an event as a second-class citizen? Where do I sign up???
<!–more–>
Bear in mind, GOProud has been a proud sponsor of CPAC for the last two years – when the confab enjoyed record-setting crowds. So it’s not like their inclusion was hurting attendance. At least, not overall.

“I find this news to be extraordinarily disappointing,” writes Christian Josi, a former executive director of the American Conservative Union and current member of the GOProud Advisory Board. “I can almost hear the bigots high-fiving. Touché, people. This is not going to go well for you.”

As another former executive director of ACU and also a proud GOProud advisory board member, I second that emotion.

The CPAC exhibit hall consists of over one hundred sponsors covering approximately the area of a football field. And the oldest and largest conservative organization in the country is afraid to let one little booth of gay conservatives be a part of this great event? How embarrassing.

Can you just imagine what Ronald Reagan – who spoke at CPAC almost a dozen times during his political career – would say about this decision? I can – based on this account by his daughter, Patti Davis, in a Time magazine op/ed in November 2003:
<blockquote>“My father and I were watching an old Rock Hudson and Doris Day movie. At the moment when Hudson and Doris Day kissed, I said to my father, ‘That looks weird.’… All I knew was that something about this particular man and woman was, to me, strange. My father gently explained that Mr. Hudson didn’t really have a lot of experience kissing women; in fact, he would much prefer to be kissing a man. This was said in the same tone that would be used if he had been telling me about people with different colored eyes, and I accepted without question that this whole kissing thing wasn’t reserved just for men and women.”</blockquote>
Based on this story, and Reagan’s well-known opposition to a California ballot initiative in 1978 that would have would have banned gays and lesbians from working in California’s public schools, I think the Gipper would have been monumentally ashamed of CPAC and ACU for their decision to toss a harmless group of gay conservatives out of their sandbox.

Don’t get me wrong. I am in no way saying CPAC and the ACU don’t have the right to kick GOProud out of their conference. It’s a private event and they can ban whoever they want. I’m just saying it’s foolish, self-destructive and indicates a serious weakness in the conservative movement.

Fear, intolerance and prejudice are ugly attributes not befitting a movement whose core philosophical underpinning is the uniquely American attitude of live and let live.

You win political victories by addition, not subtraction. Let’s hope the ACU Board of Directors comes to its senses and reverses this decision quickly before any further damage is done.