Crushing the Competition, as well as the American Dream

Crushing the Competition, as well as the American Dream
N&V Staff 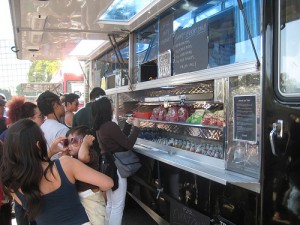 (Chuck Muth) – In Holland, Michigan this summer, Reason.com reports that “13-year-old Nathan Duszynski wanted to make some money to help out his disabled parents – his mom has epilepsy and his dad has multiple sclerosis. So he decided to open a hot dog stand. He saved $1,200, mostly money made by mowing lawns and shoveling snow.”

You know where this is going, right?

Yep. The local government shut him down before he ever had a chance to sell even his first hot dog, even though young Nathan obtained the proper license. You see, the city “bans food carts in the (downtown) area in order to minimize competition for the eight restaurants a couple of blocks away.”

Nice lesson to teach our kids about entrepreneurship, huh?

Unfortunately, this is no isolated example. Indeed, the government’s war on street vending is at a fever pitch right here in Nevada.

Recently the Clark County Commission passed new rules regulating street vending on the Strip which resulted in 16-year-old Bill Winkler – who’s been selling bottled water to tourists for two years in an effort to save money for college – being shut down and threatened with arrest.

Meanwhile, the City of Las Vegas is mulling new regulations prohibiting food trucks from operating within 800 feet (more than two-and-a-half football fields) of an existing restaurant – not for health and safety reasons, but to “protect” brick-and-mortar establishments that simply don’t like competition.

As Chicago food truck operator Matt Maroni so rightly points out, the government doesn’t prohibit McDonalds from opening up across the street from a Burger King. It’s outrageous.

“They (restaurants) want to blame food trucks for their problems,” explains Doug Porter, owner of the Curbside Café food truck in Las Vegas. Indeed, why should a restaurant owner worry about better marketing, better food, better service, greater variety and lower prices when he can just get the government to ban competitors, right?

Government policies should be promoting entrepreneurship, self-sufficiency and job creation…not serve as the enforcer for a mob-like protection racket for existing businesses that don’t like competition from newcomers.

“In large part because of the low start-up costs, street vending offers entrepreneurial opportunities to those on the first rung of the opportunity ladder,” notes the Institute for Justice. “This is especially true for minorities and immigrants often shut out of starting traditional businesses due to high capital requirements and complicated, ever-expanding government regulations.”

Las Vegas City Councilman Bob Coffin supports the proposed prohibition on food trucks operating within 800 feet of an existing restaurant, wondering why the government should “permit” such competition – even though the competition is properly licensed and in full compliance with all health and safety regulations.

That’s an easy one, Councilman. Because this is America.

Chuck Muth is president of CitizenOutreach.com and a member of Job Creators Alliance

N&V StaffMay 4, 2021
Read More
Scroll for more
Tap
Entreprenuer Goes on Strike
Who Is Looking Out for Nevadans?