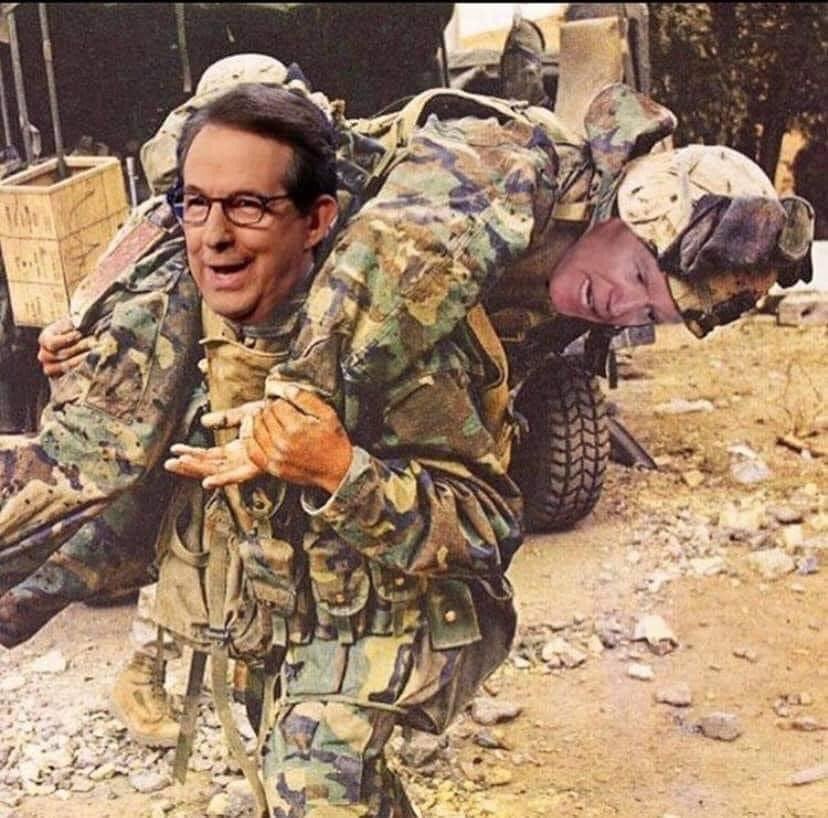 (Chuck Muth) – In a famous scene from the 1969 movie “Butch Cassidy and the Sundance Kid,” one of the Hole in the Wall gang members, Harvey Logan, challenged Butch to a knife fight.  Walking towards Logan, Butch said they first had to go over the rules.

At which point Butch kicked Logan in right in the crunch berries.  1. 2. 3.  Fight over.

Thought about that scene during last night’s Trump/Biden debate every time Joe Biden’s teammate, “moderator” Chris Wallace, came to Biden’s defense by whining that the president wasn’t following the rules.

It’s been over five years since Donald J. Trump officially entered the political arena and some are STILL surprised that he refuses to play by the rules of the “swamp.”  Some people never learn.

None of Trump’s supporters who watched the debate said to themselves afterward, “Oh, no, I can’t vote for him now.”

Not so of Biden’s supporters – even though he exceeded expectations by lasting all 90+ minutes without dropping a panty biscuit in his Depends.

The far-left crazies are gonna be upset with Biden’s backhand to Bernie Sanders, his rejection of AOC’s Green New Deal, his denial that he supports defunding the police (he does), his distancing from “Medicare for all,” and his boast that the Democrat Party is “his” party now.

And he killed himself with independents by his inability to name even ONE law enforcement organization that’s supporting his campaign in the midst of the ongoing Biden Riots.

Biden also came off looking like a typical evasive political swamp creature by ducking the question about his support for packing the Supreme Court and ending the filibuster, saying, “Whatever position I take on that, that will become the issue.”

And despite Trump’s dominating performance that some will consider off-putting, Biden undermined himself multiple times when he lost his cool and called the President of the United States a “clown,” a “racist,” a “liar” – and at one point said, “Will you shut up, man?”

The president, meanwhile, came out loaded for bear, spoiling for a fight and donning a set of political brass knuckles.  And despite being tag-teamed by Biden/Wallace, fought every step of the way.

You know how I know the president won the debate and won big?  By the galactic meltdown CNN’s cretins had afterward.  Apoplectic.  Unhinged.  They were aghast, horrified, stunned and appalled.

Don’t even try to get an appointment with a mental health expert in DC or NYC the rest of this week.  The media snowflakes are gonna be flocking to therapy rooms, curled up in a ball, sobbing uncontrollably and shedding liberal tears.

You know how else I know?  Because all the left-wing talking heads are now calling on Biden to blow off the remaining two debates.  He clearly can’t go the distance and is primed for a knock-out in Debate #2 or Debate #3…even with the aid-and-comfort of the moderators.

Speaking of which, Biden’s tag-team partner, Chris Wallace, was a disaster.  It was clear he was Biden’s cut man in the corner.

As David Reaboi observed during the debate, “Every time Trump is landing blows, Wallace comes to shut it down.”

Or as Sean Davis tweeted after the debate, “Wallace should have to disclose (his performance) to the FEC as a Biden in-kind contribution.”

“I didn’t think anything could be worse than Candy Crowley moderation,” added Dana Loesch. “That’s when Chris Wallace told America to hold his beer.”

Look, media personalities like Wallace should NOT be allowed to moderate these debates.  They are decidedly not objective, yearn for the approval of their colleagues, and salivate over the potential to score ratings points.

The media should cover the debates, not participate in them.

To wrap up, whatever else you take from the debate, this much was crystal clear: Donald Trump is a fighter.  If he’s gonna go out, he’s gonna go out on his own terms and in a blaze of glory; kickin’ like a mule and bitin’ like a crocodile.

And as General George S. Patton said in his famous speech to the Third Army during World War II…

“All real Americans love the sting and clash of battle. When you were kids, you all admired the champion marble shooter, the fastest runner, the big-league ball players and the toughest boxers. Americans love a winner and will not tolerate a loser.”

Donald Trump is a winner.  Joe Biden is a loser.

“ATIFA’s an idea, not an organization.” – Sloppy Joe Biden in last night’s debate

“Chris (Wallace) had a tough night. Two on one was not surprising, but fun. Many important points made, like throwing Bernie, AOC PLUS 3, and the rest, to the wolves! Radical Left is dumping Sleepy Joe. Zero Democrat enthusiasm, WEAK Leadership!” – President Donald Trump’s post-debate assessment

“Biden does not have dementia. He’s just mildly stupid and a gross prevaricator. … Trump is a street thug, but he’s our street thug. Authentic, unafraid, and brutal.” – James Woods

“Imagine had John McCain or Mitt Romney during their debates called President Barack Obama a ‘clown’ and told him to ‘shut up.’  They’d declare martial law and call in the 82nd airborne.” – Larry Elder

“Trump won last night’s debate. Sure, he should dial it back a bit, but he still won and Biden struggled–even with Chris Wallace defending him.  The media/Democrats know that it’s only downhill from here for Biden if he continues to debate.” – Ryan Saavedra

“Trump thoroughly SAVAGED Biden, so much so that the Democrats and their media allies are calling for a cancellation of future debates. Trump wins these and they know it. He scares them.  Biden doesn’t stand a snowflake’s chance in hell.” – Ian Miles Cheong