The amazing Las Vegas Knights open their playoff quest for the Stanley Cup tonight, but out in Pahrump a different puck will drop as tax-hiking RINO Assemblyman James “The Big Selloutski” Oscarson will square off against conservative challenger Dennis Hof and a third candidate, Dr. Joe Bradley, in a live, televised debate in the Republican primary race for Nevada Assembly District 36.

The one-hour debate will begin at 6:00 pm on KVPM Channel 46 in Pahrump and will be live-streamed at www.Facebook.com/news41

The debate will be conducted 100% under the tightly-controlled rules and restrictions insisted upon by Oscarson, who bought the one-hour airtime and picked the moderator who will be picking all the questions with no input from the public.

As such, Hof bought the 7:00 pm hour immediately after and proposed continuing the debate in a more open, one-on-one discussion.  Oscarson refused.

So instead, I’ll be moderating a no-holds-barred post-debate roundtable discussion analyzing the debate, fact-checking Oscarson’s claims, and generally ripping the Band-Aid off his last six years of lying to and misrepresenting the voters of District 36.

The panelist will include Mr. Hof, former Assemblyman Ed Goedhart – the conservative who held the seat before Oscarson – and former Assemblywoman and Las Vegas City Councilwoman Michele Fiore, who served two terms with Oscarson, including the infamous 2015 session when Oscarson voted for the largest tax hike in history.

If you’re more a political fan than hockey fan, this is gonna be must-watch TV!

P.S.  Voters in Pahrump woke up this morning to a new billboard erected by Mr. Hof… 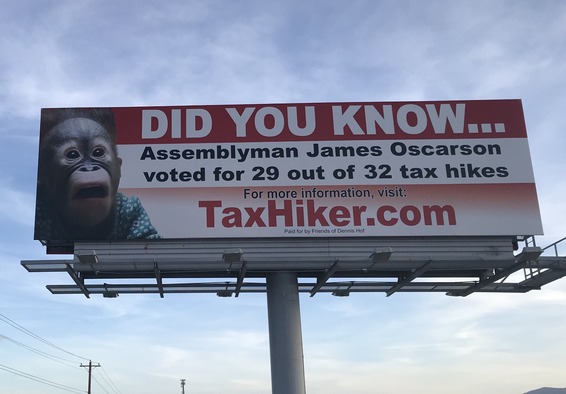 This is the most fun, bare-knuckled race going on in all of Nevada.  If you’re not subscribed to Hof’s campaign newsletter, go sign up right now before you miss what’s coming down the pike next: www.DennisHof.com

A new poll commissioned by Republican State Treasurer candidate Bob Beersshows the former state legislator and city councilman blowing away his GOP primary opponent, Derek Uehara by numbers even Vladimir Putin would be envious of.

With numbers like that, no need to even factor in a “margin of error.”

Nevada Republican Congressman Mark Amodei made news recently when he said in an interview that the hot rumor on Capitol Hill was that House Speaker Paul Ryan – a Trump antagonist – was planning on hanging up his spurs.

Ryan backers immediately said the rumors weren’t true…meaning, of course, they absolutely were.

A fact confirmed today with Ryan’s announcement that he will NOT be seeking re-election this year.

The leading contenders to replace him are Rep. Steve Scalise – who survived that shooting at a baseball field last year – and Rep. Kevin McCarthy.  McCarthy is said to be President Trump’s guy, but Scalise is considered to have the upper hand in the race to replace Ryan.

“Every morning I wake up in my office and I scroll through Twitter to see which tweets I will have to pretend I didn’t see later on.” – Paul Ryan “joking” about President Trump’s tweets last October

N&V StaffAugust 14, 2022
Read More
Scroll for more
Tap
Desperate Schwartz Dreams the Impossible Dream
Captain Underpants Comes to the Rescue of Damsels Who are Not in Distress