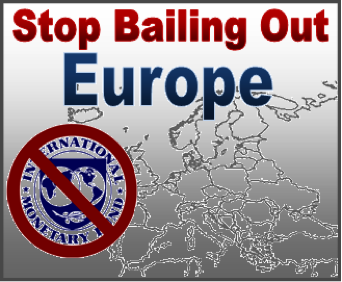 (Robert Romano of NetRightDaily.com) – “The United States has never lost a dollar of our contribution to the IMF.”

That was the U.S. Treasury bragging as recently as March 2014 that no U.S. taxpayer funds had ever been lost on loans made by the International Monetary Fund (IMF), which the U.S. backs.

So much for that.

With Greece’s default on a $1.7 billion payment to the institution, that may be starting to change. Greece owes the IMF $23.6 billion in total.

How does that affect U.S. taxpayers?

To date, the U.S. has lent $26.68 billion to the International Monetary Fund, drawn in part from our $65 billion quota and an additional $100 billion credit line that was enacted in 2009.

So that missed $1.7 billion payment? That amounts to a $452 million potential loss for the U.S. Treasury. To pay us back, the IMF will have to draw assets from elsewhere, for example, by selling gold.

All of which leads Americans for Limited Government President Rick Manning to call on Congress to get U.S. funds out of the IMF.

“Not one more penny should go to bailing out European socialist governments and the banks that lent them the money. Congress should prohibit the use of any funds created by the $100 billion New Arrangements to Borrow credit line, a 2009 expansion initiated by the Obama administration from being used for any purpose. In addition, it is the duty of Congress to prohibit the use of quota funds to cover any obligations owed by Greece to the IMF,” Manning said in a statement.

Then, Manning said, “if the Obama administration wants to support Greece or any other bankrupt government financially, the President should have to go to Congress to request the funds as the Constitution mandates.”

Manning blasted the IMF for biting off more than it could chew, even as it was clear a Greek default was inevitable.

“The IMF was never supposed to fund developed countries like Greece, Ireland, or Portugal, yet in the financial crisis these three countries have borrowed a whopping $54 billion from it, accounting for 55 percent of all its current outstanding loans,” Manning explained.

“All that time the American people were assured that there was zero risk of default, a façade that has now been exposed as pure vapor with Greece’s $1.7 billion missed payment to the IMF,” Manning said, urging Congress to get out while the getting’s good.

In the great scheme of things, a $6.27 billion potential loss may not seem like a lot to lawmakers, but it could just be the tip of the iceberg should the IMF begin bailing out much larger economies like Italy or Spain, or if Greece’s default encourages other countries to renege on their debts, too.

The combined debts of Portugal, Italy, Ireland, Greece, and Spain totaled more than $4.3 trillion in 2014, according to Eurostat. The IMF was never intended to bail out advanced economies in the first place. It couldn’t save all of Europe if it wanted to.

And in Greece’s case, with more than 25 percent unemployment and an economic depression without end, the loans do not even seem particularly helpful. So why bother?

A version of this column was originally published on NetRightDaily.com, a project of Americans for Limited Government. The project, launched in August of 2008, offers liberty-minded thought on the federal government as well as the threats that exist to individual liberty at all levels of government.