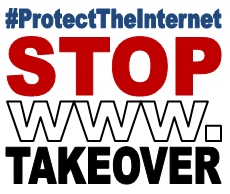 We say quietly because the change was not publicly announced by the agency via any press release, blog post, or otherwise, which modifies the extension options of the contract.

NTIA Administrator Lawrence Strickling even wrote a blog post on August 4 about the Internet governance transition to ICANN removing government oversight of the domain name system’s Internet Assigned Numbers Authority (IANA) functions, but he failed to mention that the contract had been modified.

Interestingly, on the agency’s IANA functions contract page, you can now find a link to the amendment, titled “Amendment Modification No. 003.” However, using Google’s cache function, the contract amendment still had not been posted at least as of August 17. 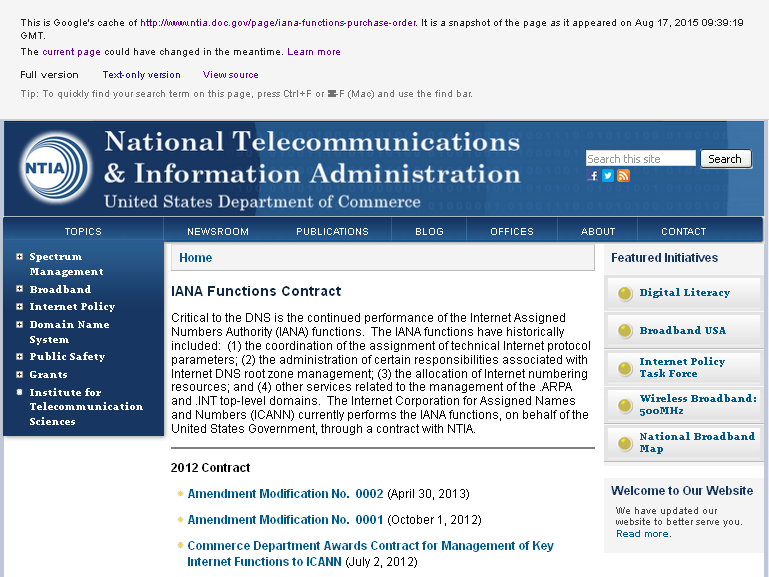 Strickling finally announced the contract extension on August 17, but he again failed to note that the reason he was able to perform this particular extension was because the contract had been modified.

All the blog post said was, “It has become increasingly apparent over the last few months that the community needs time to complete its work, have the plan reviewed by the U.S. Government and then implement it if it is approved.”

Strickling continued, “Accordingly, in May we asked the groups developing the transition documents how long it would take to finish and implement their proposals. After factoring in time for public comment, U.S. Government evaluation and implementation of the proposals, the community estimated it could take until at least September 2016 to complete this process. In response to their feedback, we informed Congress on Friday that we plan to extend our IANA contract with ICANN for one year to September 30, 2016. Beyond 2016, we have options to extend the contract for up to three additional years if needed.”

Note that Strickling writes, “We informed Congress on Friday,” which was August 14 of the contract extension. So, this raises the question: Did NTIA even bother to tell Congress that it had modified the contract with ICANN?

The reason this is significant is because, in the omnibus, NTIA was required to report to Congress 45 days prior to any changes to the IANA functions contract: “The agreement reiterates House and Senate language regarding the Internet Corporation for Assigned Names and Numbers (ICANN) and Internet Assigned Numbers Authority (IANA) matters and modifies Senate language by directing NTIA to inform appropriate Congressional committees not less than 45 days in advance of any such proposed successor contract or any other decision related to changing NTIA’s role with respect to ICANN or IANA activities [emphasis added].”

If the answer to the aforementioned question is no, or if only a few key members of Congress were apprised of the change to the contract, leaving the vast majority of members in the dark, here’s what members need to know.

Under federal regulations, NTIA can just change the contract willy-nilly, even though it was supposedly an open bid contract. So even though the agency has said it is doing a one-year extension, which on the surface looks like a victory for those who oppose the Internet transition, the agency apparently can just come back and change the contract again. And Congress may not find out about it until it’s too late.

That is, unless Congress defunds the transition now in the continuing resolution or omnibus legislation for fiscal year 2016, as they did in the current fiscal year. Otherwise, there will be nothing to prevent the transition from occurring prior to the contract ending, or when it ends, now set for September 30, 2016.

Initially many observers were optimistic about the time that a one-year extension seemingly affords policymakers to consider or block the Internet giveaway. Now, it is of little comfort when NTIA can just unilaterally change the contract on a whim.

The point is, if you’re a member of Congress, and this is the first you are hearing about this, you should be outraged. If this is NTIA’s version of keeping Congress in the loop, what hope is there that the measly reporting requirements of, say, the DOTCOM Act will ever be honored? House Republican leaders promise the bill will “protect the future of the Internet through Congressional oversight of the administration’s proposed transition of stewardship of the Domain Name System to the global Internet community.”

The Internet giveaway should be defunded permanently until it is positively authorized by an act of Congress — before it is too late to do anything about it.