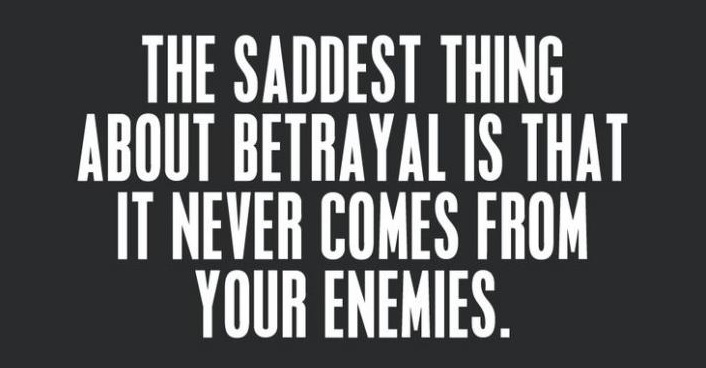 (Steve Sanson) – On June 2, 2015, the last day of Nevada’s legislative session, the Nevada legislature passed the largest tax hike in Nevada history. The hike is set to raise $1.1 billion in new or expanded taxes which will be used primarily to reform Nevada’s K-12 education system. This bill was the centerpiece of Nevada Governor Brian Sandoval’s legislative agenda.

But how did this bill and other unpopular bills pass in 2015, given that Republicans formed the majority in both houses of the State legislature, and were universally opposed to these issues?

Regardless of whether you support or oppose the substance of these bills, the underhanded tactics that were used to pass them should awaken every Nevadan to become more informed and to vote to prevent this type of public abuse from being rewarded and repeated.

Here’s a glimpse of some of the worst “dirty politics” in Nevada’s recent history:

Sandoval needed 2/3 majority vote of the Assembly to pass his sweeping tax bill. Since the Senate only needed to concur with the Assembly for the bill to pass, passing the Assembly was universally regarded as the bill’s biggest hurdle.

To win over the moderate Republicans, Sandoval linked his proposed tax hike to robust “parent choice” school legislation which promised to funnel money to families with children in private schools. School choice had been a key issue for Republicans and was enough to convince moderate Republicans to vote for the tax rate hike regardless of the fact that they had expressly promised Nevadans that they would not vote for tax increases.

Next, Sandoval’s staff put on a “full-court press” using every possible tactic, to marginalize and essentially “neuter” non-establishment conservatives who would not succumb to the Governor’s initial tactics. 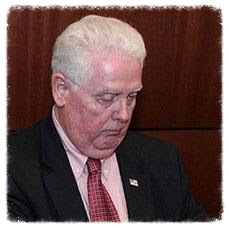 Conservative Republican State Assemblyman John Hambrick had promised to keep conservative Assemblywoman Michele Fiore as Majority Leader of the Assembly. Hambrick was trusted by the entire conservative caucus because he had kept his word in the past and had honored his prior promises not to raise taxes.

After a few days of pressure from Sandoval and his moderate GOP allies, however, Hambrick crumbled. Sandoval allegedly promised to support Hambrick’s in future runs for office in exchange for supporting the governor’s tax bill. Part of the deal involved replacing Fiore, who did not support Sandoval’s tax hike, with moderate Republican Paul Anderson, a key Sandoval supporter, as Majority Leader. Within a few days, Hambrick not only did just that, but he also removed or prevented Fiore from holding any leadership role in any legislative committee.

Thereafter, it became clear that all of Hambrick’s subsequent votes and strategies were orchestrated by Sandoval and Anderson. Sources report that Hambrick was so subservient to Anderson that he had Anderson run the caucus meetings and wouldn’t even act in his position as Speaker on the floor of the Assembly without first seeking Anderson’s permission.

Hambrick, formerly a strong conservative, was essentially reduced to puppet status for Sandoval and Anderson. 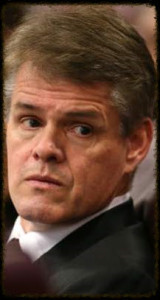 Once Hambrick was on board with Sandoval’s plans, Sandoval and Hambrick had to ensure that Hambrick remained the conservative Assembly Speaker. Chris Edwards, a freshman Assemblyman from District 19, was the sole swing vote in selecting the Assembly Speaker. Sandoval and Hambrick plied Edwards with campaign funds and promises of support for his next election if he would give his vote for leadership of the party to Hambrick. It worked. Chris Edwards, single-handedly served the conservative leadership to Hambrick on a silver platter. Edwards had previously routinely sided with conservative Republicans, even as he mercilessly complained about his outstanding campaign debt.

After Sandoval and Hambrick’s donations and promises, Edwards stopped complaining about his campaign debt, and instead, inexplicably started voting with Hambrick to support the tax hike — a complete turn-around of his prior positions. 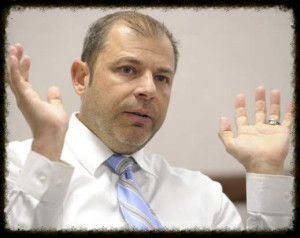 As soon as Hambrick named Anderson as Majority Leader, everything changed for conservative Republicans.  Many decisions were made in closed door meetings between State Senator Roberson, Anderson and the Governor’s staff instead of in public hearings.

Anderson is alleged to have left caucus meetings midway through without even bothering to hear what others had to say. When he bothered to share anything with the conservative half of the caucus, he had no problem telling straight out lies.

One particularly troubling lie involved Senate Bill 504, Nevada’s Anti-Bullying Bill. The Bill in its original form consisted of little more than setting the parameters for parents and a chain of command for reporting bullying.  It was just a few pages long. It easily passed the Assembly with many conservatives voting for it.

Anderson then spearheaded efforts to amend the bill. He made it dozens of pages long, claiming that the only provisions he added were those that were required by federal law. He indicated that passing the amended bill would save Nevada $30 million. He then called for an “emergency” session of the Assembly to pass the bill. Anderson indicated that it would be a personal favor to make this bill pass fast; the understanding was that the favor was for Sandoval.

Lawmaker after lawmaker stood up and asked for more time to simply READ this bill that had just been dumped in their laps for an emergency vote. Yet, Anderson directed Hambrick to deny those requests and take the emergency vote immediately. Given the lack of time, some conservatives voted for the bill, taking Anderson at his word regarding the nature of the added provisions in the bill. It was only later, however, once the bill was passed and available for deep reading, that they learned the truth.

The bill contained provisions that were not required by federal law, and that Anderson knew conservative lawmakers would refuse to pass had they had the opportunity to study the bill. For example, buried deep inside the amended version was a provision that in part defined “bullying” as preventing transgender students from using the bathroom facility of their identified gender. While some states have passed laws allowing such cross-gender bathroom use, federal laws to date have no such requirement. This was indeed just a rouse and a lie that Anderson used to get a bill passed knowing the majority of Republicans would have otherwise opposed it.

Some may call this tactic “politics,” but outside the coffers of the legislature this tactic is more accurately characterized as “fraud” and should have no place in our government. 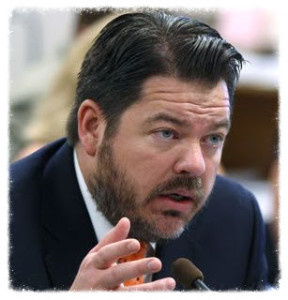 Roberson became a staunch supporter of Sandoval’s tax hike bill, even though he was a conservative Republican. Sources indicate that this was at least in part due to Sandoval’s promises to support Roberson’s intended future run for U.S. Congress.

Roberson flexed his Sandoval muscle in connection with Assemblywoman Michele Fiore’s bill to decriminalize minor traffic violations and make them civil matters, as is currently the case in Arizona and Utah.  The benefit of this change would have been to free up valuable criminal court resources. The bill had 50 sponsors, even though few bills get more than about 10 sponsors, and the sponsorship came from both the Assembly and Senate. There was no question that this bill would have benefited Nevada as demonstrated by the number of sponsors it received.

The bill passed the Assembly with all members voting for it except for freshman Chris Edwards and Derek Armstrong who voted “no,” seemingly for no other reason than because they don’t like Fiore. They chose to disregard the positive impact this bill could have for Nevada, and instead chose to act out their personal vendettas towards Fiore.

When the bill was finally heard in the Senate, however, Roberson stopped the bill in its tracks, seemingly for no other purpose than to retaliate against Fiore for refusing to support Sandoval’s tax increase.

Interestingly, Roberson is now running for U.S. Congress and he has Sandoval’s support.

Brian Sandoval, Nevada State Governor: “The Poster Boy for What is Wrong with Politics” 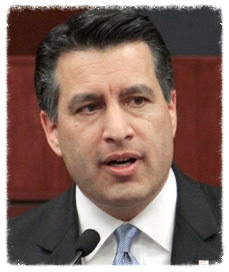 Sandoval’s tax hike agenda went against everything for which the voters asked.  Sandoval’s staff was relentless in seeking the required votes to get his tax bill passed. He demonstrated that his “enforcers” in leadership could and would stop good legislation in its tracks if a lawmaker was not willing to “play ball” on the tax hike bill. He used every political tactic including payments to legislative campaigns, promises of future political support, and even ushering into law bills that were particularly important to individual legislators but which did not actually have the support of the Assembly.

One example of this was Assemblyman David Gardner’s bill to break up the Clark County School District.  That bill was dead as a door nail.  Yet a couple of days before the vote on the tax increases, Sandoval’s henchmen ascended on Gardner and persuaded him to change his mind and vote for the taxes.

Elected officials with this kind of character have no place in the halls of our legislature.  They are a symbol of the corruption we see from City Councils to Washington D.C., where personal ambitions, monetary donations and personal vendettas trump the needs of the citizens that these lawmakers swore to serve.

Let’s identify and keep these officials, and anyone else who uses these kinds of underhanded tactics, from winning in their next elections. Let’s send a clear message from the people of Nevada that “dirty politics” will no longer be tolerated in our great state.

Also, please note that there are over 300 Nevada Laws on the books that are over 100 years old. Let’s amend or remove these laws from the “Horse and Buggy” era. Let’s clarify the Veterans Court law so it is not left to differing court interpretations, put security measures in place to protect moped riders, and amend laws that presently effectively put sitting Sheriffs above the law.