Does Congress have the power to abdicate its powers?

Does Congress have the power to abdicate its powers?
N&V Staff

(Thomas Mitchell) – It was somewhat amusing to hear Arizona Rep. Raul Grijalva argue against Nevada Rep. Cresent Hardy’s amendment that would block funding in key counties in several states for presidentially designated national monuments because the law allowing it, the Antiquities Act, has been around since 1906. (At about 9:30 into the video.)

The Constitution has been around since 1789.

Article IV, Section 3 of that document reads: “The Congress shall have Power to dispose of and make all needful Rules and Regulations respecting the Territory or other Property belonging to the United States …”

The question is whether Congress has the power to abdicate that power and turn it over to the president, as it did with the Antiquities Act of 1906.

A Heritage Foundation essay by a federal judge argues it may not:

Although the Constitution contains no explicit prohibition against Congress delegating its legislative powers (to the President or an administrative agency, for example), the principle of non-delegation is fundamental to the idea of a limited government accountable to the people. Indeed, the people, in whom sovereignty ultimately resides, carefully assign certain powers to each branch of government. The delegated powers are defined as placed in distinct branches of government for the “accumulation of all powers, legislative, executive, and judiciary, in the same hands,” writes James Madison in Federalist No. 47, “may justly be pronounced the very definition of tyranny.” While the executive must exercise some discretion in the application of law, lawmaking remains the prerogative of Congress. Since the New Deal, the Supreme Court has unfortunately sanctioned ever greater delegations of legislative power to administrative agencies. That the courts have flouted this principle does not mean that Congress can or should ignore this element of constitutional construction.

Still the Supreme Court has upheld the act three times, but on arguments other than constitutionality. 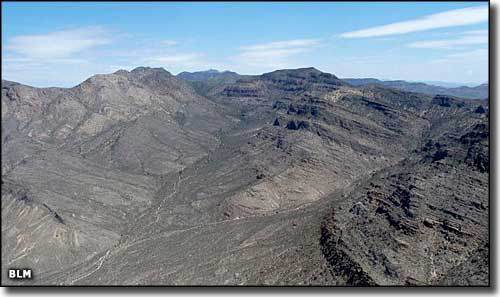 Mount Irish in the Basin and Range area.

Despite this questionable authority, on Friday the president is expected to sign a proclamation creating a 700,000-acre Basin and Range National Monument in Coal and Garden valleys in Lincoln and Nye counties, even though most of the state’s congressional delegation and local elected officials oppose it. All that matters is that Harry Reid wants it.

On Wednesday, the House backed Hardy’s amendment by a vote of 222-206. The only Nevada representative voting against it was Dina Titus.

But Hardy, in whose district the soon-to-be monument is located, told the Las Vegas newspaper’s Washington reporter the amendment will not stop the designation, but would serve as a message to President Obama that Congress is unhappy with such executive fiats.

“Here we have bureaucrats continuing to shove things down people’s throats in areas where people don’t even have a chance to address their issues,” Hardy was quoted as saying.

According to the draft of the proclamation, cattle could still graze on the land, if the BLM continues to allow it, but no new roads or rights of way would be allowed. It has been speculated that Reid wants the designation — not so much as to protect antiquities and the “art” project called “City” near Hiko — but to block a railroad line that could take nuclear waste to Yucca Mountain. But what is to stop Congress — with its power to “make all needful Rules and Regulations respecting the Territory or other Property belonging to the United States” — from creating such a right of way?