Drop in industrial electricity consumption tells the tale of the no-growth U.S. economy 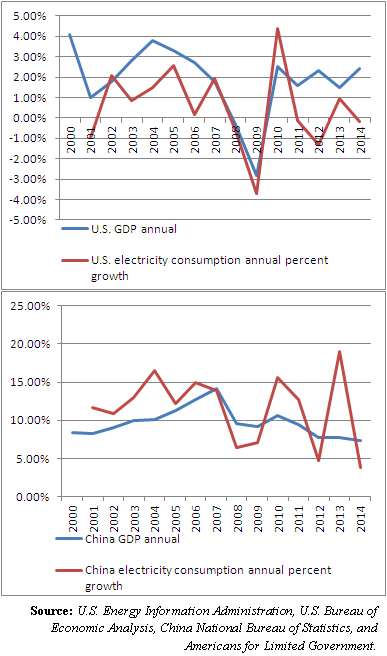 (Robert Romano, NetRightDaily.com) – If electricity consumption is supposed to be a reliable proxy for economic growth, the only conclusion one can come to is that the U.S. economy has not grown in any meaningful sense since 2007.

The U.S. is using no more electricity now than in 2007, even though the working age population has expanded by 16 million during that time.

This has been a death knell to the U.S. economy. To the extent we’re seeing any growth, it is based entirely off of gains in the working age population, the rate of which has been slowing dramatically since the baby boom ended. In the meantime, the U.S. has been deindustrializing.

And, well, the electricity consumption rate shows a dramatic expansion has taken place in China, no question, based on a rapid increase in industrial production. But it slowed in 2014, along with its economy. Now, China is experiencing a massive correction.

That might be thanks to the increased costs of doing business in the U.S. due to the Obama Administration’s war on coal, which has reduced the usage of the cheap, reliable energy source.

But for those additional costs, the U.S. economy might have experienced a more robust recovery.

The result is that during the period from 2006 to 2014 – with its 1.29 percent average annual growth rate – we’ve seen the slowest economy since 1930 to 1939, when it averaged 1.33 percent growth a year. This could end up being the worst decade of growth since the GDP was invented in 1934. Even worse than the Great Depression.

And Obama’s Environmental Protection Agency is guaranteeing it. At exactly the time the U.S. needed to increase production in the industrial sector to get its economy back on track after the financial crisis, the EPA was there to make sure it never got moving again.