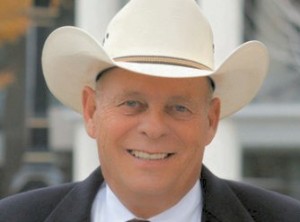 Assemblyman Jim Wheeler is the Republican incumbent representing District 39, which includes all of Story County, all of Douglas County and western Lyon County.

My professional experience is all in the private sector. I started working on the family ranch at a very young age and got my first paying, part time job at 14yrs old, working in a gas station. Realizing I wasn’t making enough money to reach my goal of buying a car, I got another part time job working in a veterinary hospital. I was able to buy that car at 15yrs old. I believe that work ethic has carried over into both my private end political life.

I joined the Air Force toward the end of the Vietnam Era and was assigned to the 443rd Military Airlift Wing.

I started a high performance auto parts manufacturing firm in 1990 and grew it rapidly. I was named CEO by the board of Directors in 1991 and held that position until the sale of the company in 2005. During and after that time, I also owned 2 small horse and cattle operations, one in Nevada and one in Texas.

District 39 encompasses all of Storey and Douglas Counties as well as a portion of Lyon County from the Carson City line to 6 Mile Canyon Road. This is a heavily Republican, Conservative District with a 19 point Republican advantage.

Each and every bill I sponsored either reduced the size of government or its scope of influence over our lives.

My experience in the private sector gives me a viewpoint that my opponent cannot possibly have as a career government employee. Nevada still finds itself at the bottom of the list as a job creation state and at the top of the unemployment list. The policies that have been instituted by our state government have proven to be ineffective in drawing new business to Nevada and need to be changed.

I am not one to label myself as a “moderate” or as a “Tea Party” Legislator. I firmly believe that an elected official should strive to represent the wants and wishes of his/her constituents. I am a staunch conservative from a very conservative district and will continue to represent my constituents in such a manner.

Earlier in the campaign I released my “Contract With Nevada” that outlines my legislative priorities for this session:

A. Ask the Governor to not renew the employee payroll tax (sunsets).
B. Repeal the Prevailing Wage.
C. Repeal the state business license fee.

A. Close down Nevada’s Obamacare exchange and open a competitive website (to the
Federal Exchange that will take its place) based on free market principles.
B. Repeal the Medicaid expansion that was included in Obamacare.
C. Pass meaningful lawsuit‐abuse reform laws that will minimize frivolous lawsuits.

3. Work toward a better education system in Nevada.

A. Implement parental school choice through the use of vouchers.
B. Pass a clear and unambiguous parent trigger law that will allow underperforming
schools to be converted to charter schools.
C. Opt out of the federal Common Core Standards.

Please see the Contract With Nevada above.

I voted against the ‘sunset’ taxes and will do so again. I believe Nevada can live within its means by looking at the budget from a zero based perspective that will make each department head justify all expenditures. Also, as you can see in my Contract With Nevada, there are many places where the state can save money by getting rid of programs that have proven to be ineffective. I have also signed the Taxpayer Protection Pledge, guaranteeing I will not vote for any raise in taxes. My opponent has so far refused to do so.

In my opinion, the best way to address the problem with our schools in Nevada is to return control to the local districts. It is the local school boards and parents who need to be in control of our children’s education. Not some government bureaucrat. We can accomplish this by adhering to section 3 of my Contract With Nevada, above.

As I said in my answer above, school choice is paramount to revamping our failing school system in Nevada.

Minimum wage has traditionally applied to entry-level positions where the employee is learning the skills to advance in life. Nevada currently has a law in place that puts our minimum wage at $1 over the federal minimum wage. While this in not a living wage for someone trying to support a family, it was never intended to be. If we were to raise the minimum wage to the suggested $10.10 per hour, I believe it would put an undue burden on Nevada families in the form of increased prices for goods and services.

When gaming was made legal in Nevada, there was virtually no competition in the rest of the country for this industry. Now there is competition throughout the world. As with any other business, if it is more profitable to do business in another location, the owners of these establishments will invest in the most profitable location. More taxes on this industry will be counterproductive.

Mining also pays a higher tax rate than other industries in Nevada, as is guaranteed by our Constitution. Mining is the largest employer of high-paying jobs in Northern Nevada. To raise the tax on this industry would also be counterproductive. The argument has been made that Nevada is where the minerals are and therefore mining will not move out of state if there is a raise in taxes. In my opinion, this argument is false given the fact that only 4% of minable minerals are in Nevada. Common sense tells us that if it is more profitable to move an operation to a place where profits are higher, the mining industry will do so, devastating many local economies in Nevada.

All Nevada lands that are currently under federal ‘ownership’ should be returned to Nevada. These lands can be better managed by the state thus increasing our state revenues. Lands that are currently managed by the BLM can be used for grazing, recreation, industry and other uses. These revenue streams would then flow to the state. The federal government should then be allowed to lease or purchase some of these lands such as where current military bases are located, replacing the P.L.I.T. revenues. Other lands should be set aside for some of the same purposes they now have, such as hunting, grazing, mining and other uses.

This is why I cosponsored the Nevada Lands Bill in the last session that urges Congress to return our lands to the rightful owner, the State of Nevada.

Until such a time as marijuana is removed from federal law as a schedule-one narcotic, I don’t believe that it should be legalized in the state. I voted against this bill in the last session. If a case can be made to the medical benefits of this drug, then it should be removed from the federal schedule-one narcotics list and sold through traditional outlets for prescription drugs such as pharmacies where dosages and prescriptions can be tightly controlled.

If the sage grouse is listed as a protected species, it could be devastating to rural communities in Nevada. Studies have already shown that predator control will solve the problem of dwindling sage grouse populations. This is where we need to concentrate our efforts.

Currently, part of the fees for hunting licenses in Nevada goes to predator control. During the last session, there was a bill that would have diverted some of these fees to yet another study instead of predator control. I fought against this bill.

17. Define your position on fracking and other means of oil exploration in Nevada. Do you support coal fired plants?

Fracking is not a new technology as most people think. It has been used for decades in deep, hard to get to deposits. As of this time, there has not been even one proven example of fracking hurting the ground water tables by a reputable company, in as much as the fracking takes place below the water tables and regulations are extremely rigid.

There has been a recent discovery of oil and natural gas in Northeastern Nevada that could help relieve our dependence on foreign oil, create hundreds of high paying jobs, and add much needed revenue to the state general fund. While regulations must be kept stringent, these deposits need to be harvested.

I don’t believe the state government should be in the business of picking winners and losers. When we give subsidies to certain businesses to come to Nevada, we are hurting current Nevada companies that are competing with these businesses and creating an unfair playing field.

What we should be doing, is creating a business friendly atmosphere throughout the entire state. This includes low taxes and fees for all businesses. Companies will come to states where their long-term cost of business is the lowest.

I do support campus carry. I was one of the co-sponsors of AB-143 in the last session that would have allowed this. It is reprehensible to me that law-abiding citizens are unable to protect themselves from criminals.