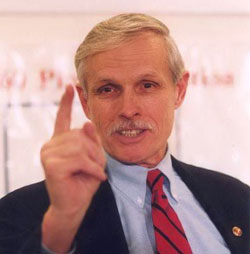 (Jim Martin of 60 Plus) – As a presidential candidate in 2008, President Barack Obama told the San Francisco Chronicle’s editorial board: “under my plan … electricity prices will necessarily skyrocket.” Since then, President Obama’s Environmental Protection Agency (EPA) has been hard at work ensuring that “plan” comes to fruition. The latest front in EPA’s battle to make electricity prices skyrocket targets the vast network of power plants across the country – especially those power plants that provide Americans the most affordable electricity.

EPA refers to this frontal assault as the “Clean Power Plan.” Only in the agency’s pie-in-the-sky world, however, could it be seen as anything but a “Cruel Power Plan,” especially through the eyes of seniors who can ill-afford skyrocketing electricity prices. According to analysis completed by NERA Economic Consulting, EPA’s CPP proposal could, on average, increase electricity rates by 18 percent for Nevada consumers, with peak-year increases as high as 22 percent. That may not seem like a lot to a lucky few, but for seniors and others on a fixed or low income, it is a significant jump.

It’s no wonder officials and regulators from 32 states have expressed opposition to EPA’s CPP proposal. It spells disaster for those who can least afford it and meets no meaningful environmental goals. Compounding problems, the proposal tramples state rights. In comments submitted to EPA last fall, the Nevada Division of Environmental Protection, the Public Utilities Commission and the Governor’s Office of Energy stated: “The Clean Power Plan threatens the long-standing authority that states have over energy and resource planning.”

Attorney General Adam Laxalt should consider protecting Nevada’s legal standing by joining a lawsuit brought forth by more than 14 states and other stakeholders against the proposal. That suit will be heard by the U.S. Court of Appeals in Washington, D.C. on April 16th. It is telling that the courts have decided to take this up even before the proposal is final, recognizing this legally flawed proposal will cause irreversible damage to state ratepayers and businesses that rely on affordable energy.

Another crucial opportunity to protect Nevada seniors from the electricity rate increases that will result from EPA’s disastrous proposal sits with the Nevada State Legislature. Senate Bill 438, currently being considered by the Senate Natural Resources committee, would give the state legislature an important role in determining how the state responds to EPA’s proposal. This decision is far too important not to be weighed by representatives whose constituents struggle every day to make ends meet.

Senate Bill 438 will empower the legislature to protect Nevada’s rights in determining how the state provides electricity for its residents, instead of ceding that authority to EPA. It places representatives rightfully in the position of deciding what makes the most sense for Nevada. Otherwise, Obama’s EPA will continue on with their fight to make electricity prices “necessarily skyrocket” for seniors and all Nevadans who deserve much better from those in elected office.

Jim Martin is the Chairman and Founder of the 60 Plus Association, a non-partisan seniors advocacy group with a free enterprise, less government, less taxes approach to seniors issues. Visit www.60Plus.org for more information.