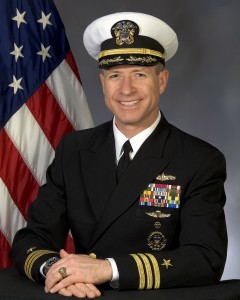 (Lori Piotrowski) – Kirk Lippold, former commander of the USS Cole when it was attacked by al Qaeda terrorists in the Gulf of Yemen in 2000, announced last week his candidacy for Nevada’s second congressional district. The following is an exclusive e-interview with Commander Lippold.

NN&V: Why are you running and please don’t tell us it’s to “give something back”?

LIPPOLD: Frankly, I’m angry at what I see from our government today. Out of control spending and the national debt is hurting Nevada families. In addition, and no one seems to talk about this, but our debt jeopardizes our national security. I served on active duty in the Navy for 26 years, I feel a strong desire to serve the nation again. Unlike my opponents in this race (Sharron Angle and, most likely, Brian Krolicki) I haven’t spent the last 13 years running for office. My experience in the military has given me the leadership, integrity, and vision that is sorely needed to get government off our backs and serve the interests of Nevadans first.

NN&V: Rumors on the grapevine say you don’t actually live in Nevada. True?

LIPPOLD: False. Following retirement, I did spend two years in Washington, D.C., working for Military Families United, an organization dedicated to helping families who have lost loved ones in Iraq and Afghanistan. I am very proud to have grown up in Carson City and served in the Navy, keeping Nevada as my home of residence throughout my 26 years of service. I am a resident of Carson City and live there now.

NN&V: You reportedly were considering jumping into the U.S. Senate race last year. Why did you ultimately decide not to make that run?

LIPPOLD: I decided it was best for Nevada and the Republican Party not to further muddy the waters by entering an already overcrowded and contentious primary race.

NN&V: Other talked-about candidates in this race have toiled in the party trenches for many years. Why should Republican grassroots activists get behind a newcomer who some say hasn’t paid his party dues?

LIPPOLD: It is true, I am not a career politician but I do offer Nevadans a wealth of experience in leadership and integrity that is sorely lacking in politics today. I am not part of the entrenched political structure and to me that is a strength. I will bring new ideas to solve the most challenging problems facing our state and the nation and I’m not beholden to anyone other than the voters.

NN&V: Where would you draw your financial support?

LIPPOLD: My financial support will come from everyday Nevadans and Americans across the county who believe, like me, that it is time to reduce the size of government and get it off our backs, get the out of control deficit reduced, and maintain a strong national defense.

I have a strong message of leadership and vision for the state and as Nevadans get to know me, I hope they will support me in addressing those important issues.

NN&V: What do you believe is the proper role of government?

LIPPOLD: Limited. The role of government, using the Constitution as its framework is to facilitate the conditions for economic growth, national security, and democratic freedoms – not higher taxes and burdensome regulations that hurt families and individuality.

NN&V: As Republicans go, would you say you’re closer to being a Reagan Republican or a Goldwater Republican?

LIPPOLD: I am much closer to being a Reagan Republican because I am not only a staunch conservative but I also believe that many of the social values that provided the foundation for this country to become the greatest nation on earth have been slowly degraded and undermined by liberal activists. We must not allow those who seek to promote a socialist agenda and do not believe in the power and rights of the individual to seek their own destiny and success within our society to continue to diminish the integrity of the family and devalue our core beliefs enshrined in the Constitution.

NN&V: Do you consider yourself a “tea partier”?

LIPPOLD: I embrace the Tea Party and what it stands for. Like the Tea Party, I am also a strong proponent of limited government and citizen sovereignty. I am very supportive of any citizen or group that takes up the charge to make their government more responsive to the people.

NN&V: Have you signed the Taxpayer Protection Pledge?

LIPPOLD: I am looking forward to signing it at an appropriate venue; perhaps the next time I’m on Alan Stock’s show.

LIPPOLD: Yes. Not only is it a civil rights issue, it’s ultimately a free-market issue. School vouchers are one of the most effective ways to promote choice and competition in our school system. It reflects the principle that parents must have control and oversight of their children’s education. Vouchers lead to innovation – what we are sorely lacking today due to zip codes defining where our children should go to school.

NN&V: Should there be a ban on assault weapons in the United States?

LIPPOLD: No. There should be no restrictions on our Second Amendment rights.

NN&V: In your opinion, when does constitutionally protected life begin: conception, birth or somewhere in-between?

LIPPOLD: Life begins at conception and should be protected by the Constitution.

NN&V: Do you believe No Child Left Behind needs to be fixed, repealed or left as is?

LIPPOLD: The law as originally envisioned was an excellent start at holding school districts and teachers accountable for defined standards of performance to measure student achievement. Since its inception, massive government bureaucracy has limited its effect and more effective methods of measuring student progress and academic growth have been developed that mandate an update to the No Child Left Behind legislation.

NN&V: Do you believe Congress should address the issue of “birthright citizenship”?

LIPPOLD: Yes. The 14th Amendment was never intended to give citizenship to illegal aliens. The laws and policies of the government must be reviewed with an eye toward legally defining its interpretation to reflect its original intent.

LIPPOLD: No. They will have the rest of their lives once they turn 21 to consume alcohol.

NN&V: What is your position on homosexuals serving openly in the military?

LIPPOLD: My fundamental disagreement is with the Obama Administration overturning Don’t Ask Don’t Tell. It was rushed through Congress without debate and a true assessment of the impact of the decision on military readiness. In short, neither the President nor the senior political or military leadership was willing to take a firm stand on Don’t Ask Don’t Tell and openly fight for the issue to be debated and discussed by society before it was abandoned.

NN&V: Are the military’s current rules of engagement in the Middle East appropriate; and if not, what needs to be changed?

LIPPOLD: No. While the rules of engagement (ROE) undergo constant review by the military chain of command, this Administration has allowed too many political and foreign influences to unduly increase the risks that American troops must endure to successfully complete their missions without unnecessary loss of life.

NN&V: If you were serving in Congress right now, under what circumstances, if any, would you vote to increase the debt limit this month?

LIPPOLD: Given the short period of time to adequately debate and determine the amount and scope of deficit reductions necessary to get our fiscal house in order, I do not support raising the debt limit.

NN&V: Should otherwise law-abiding adults face jail time for simple use or possession of small amounts of marijuana?

LIPPOLD: Yes. Marijuana is the focal point in the war on drugs. It is the main source of money for the narco-terrorists that are undermining the Mexican government and is the primary cause for the increased violence on both side of the border. Marijuana is a gateway drug and should remain outlawed in any amount for the good and welfare of America’s youth.

NN&V: Can we see your birth certificate? Just kidding. (No, really, can we see it?)

LIPPOLD: Yes. Thank you for your vote of confidence in my political future and Donald Trump may view it as well.