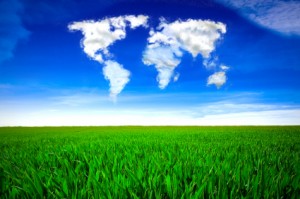 (Fred Weinberg/The Penny Press) – This nation may well have truly gone out of its environmental mind.

I was watching Fox News the other day and they were doing a story on the use of stem cells to engineer meat which could be grown without the benefit of a cow. The reporter said, and I’m quoting here, it would be environmentally friendly because it would end the environmental damage done by farming!

The environmental damage caused by farming!

It was so breath-takingly stupid that I actually picked up the remote to see if I wasn’t on the SyFy channel or the Green channel or Al Gore’s Currents.

The environmental damage caused by growing the food we eat.

It’s the same mindset that wants “green” jobs. What are “green” jobs? Well, apparently, not farming. Unless you are growing government subsidized corn, which is now too valuable to eat because we can turn it into ethanol to fuel vehicles.

You know, so we don’t have to drill, baby, drill. Causing all that environmental damage.

I grew up in Central Illinois. Corn, soybeans, soft wheat, hogs and cattle.

I’d be willing to bet that all 76,000 farms together don’t cause as much environmental damage as the rush hour wrecks on the Dan Ryan and Stevenson expressways in Chicago. And that would include the Christmas Tree farms.

This is the kind of nonsense you get when people who have never seen a cow get to start making policy—and reporting on it.

People in Washington, DC, whose idea of environmental protection is driving a Toyota Prius, actually think that growing food on the land causes environmental damage. Maybe they make a mental exception for “organic” farming—whatever that it—but the truth is that today’s left wing sees anything which suits mankind’s needs as “pollution.”

And for some reason these wackos have enormous sway over what passes for intelligentsia in the White House. A White House run by a guy who told the San Francisco Chronicle:

“When I was asked earlier about the issue of coal; under my plan of a cap and trade system, electricity rates would necessarily skyrocket.”

No wonder we can’t build oil pipelines, drill in Alaska or burn coal to heat our houses with electricity.

We have raised a generation of complete morons who have absolutely no understanding of how the world works and what man’s place in that world is.

They actually think that man is an interloper in the ecosystem.

That the world would be better if we didn’t exist. Or, if we lived in caves, kept warm by campfires wearing bearskins. Well, maybe not campfires because of the pollution burning wood would create and certainly PETA would be against the use of a bear’s skin to make a coat.

“And the supreme arrogance? Save the planet! Are these people kidding? Save the planet? We don’t even know how to take care of ourselves; we haven’t learned how to care for one another. We’re gonna save the (expletive deleted) planet? And, by the way, there’s nothing wrong with the planet in the first place. The planet is fine. The people are (expletive deleted)! Compared with the people, the planet is doin’ great. It’s been here over four billion years; The planet isn’t goin’ anywhere, folks. We are! We’re goin’ away. Pack your shit, we’re goin’ away. And we won’t leave much of a trace. Thank God for that. Nothing left. Maybe a little Styrofoam. The planet will be here, and we’ll be gone. Another failed mutation; another closed-end biological mistake.”

I’m not sure which of these viewpoints is entirely correct, but I’m willing to bet that whatever creatures with opposing thumbs and brains inhabit the planet after we’re gone will figure out a way to grow their food.