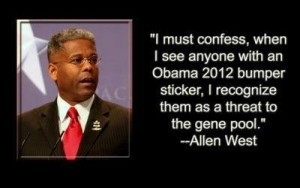 Allen West was born and raised in Atlanta, Georgia in the same neighborhood where Dr. Martin Luther King, Jr. once preached. He is the third of four generations of military servicemen in his family.

During his 22 year career in the United States Army, Lieutenant Colonel West served in several combat zones: in Operation Desert Storm, in Operation Iraqi Freedom, where he was a Battalion Commander in the Army’s 4th Infantry Division, and later in Afghanistan. He received many honors including a Bronze Star, three Meritorious Service Medals, three Army Commendation Medals and a Valorous Unit Award. In 1993 he was named the US Army ROTC Instructor of the Year.

After his retirement from the Army in 2004, Allen taught high school for a year before returning to Afghanistan as a civilian military adviser to the Afghan army, an assignment he finished in November 2007.

In November of 2010, Allen was honored to continue his oath of service to his country when he was elected to the United States Congress, representing Florida’s 22nd District. As a member of the 112th Congress, he sat on the Small Business and Armed Services Committees and was instrumental in passage of the 2012 National Defense Authorization Act.

He is a Fox News Contributor, a Senior Fellow at the London Center for Policy Research, and regularly writes for numerous media outlets.

Allen is an avid distance runner, a Master SCUBA diver and motorcyclist. His wife, Angela, holds an MBA and Ph.D. and is a financial planner. His older daughter, Aubrey, attends college in south Florida, and his younger daughter Austen, is in high school.

ILC: When did you realize you were a conservative?

West: My parents raised us based upon conservative principles; faith, family, education, personal responsibility, and service to the Nation. It was always around me but I never really knew what it was.

I certainly understood more when I heard the words of Ronald Reagan as he ran for and became our President. I was a young Lieutenant when Reagan was our Commander-in-Chief and there was something about his presence, his leadership, the way he communicated American exceptionalism that drew me.

It was, without a doubt; that was when I became aware that I was a conservative at heart, not about political party but my sense of governing philosophy.

ILC: What does being a conservative mean to you?

West: Being a conservative for me truly goes back to the three fundamentals of Booker T. Washington: education, entrepreneurship, and self-reliance.

See, Constitutional Conservatism promotes the pursuit of happiness while progressive socialism advances the theory of a guarantee of happiness — by government.

ILC: What do you love about being a conservative?

West: I love being a conservative because it is what my Parents raised me to be — not a Republican or Democrat. They raised me to be a highly educated and personally responsible servant to God and Country. This is what Buck and Snooks West wanted me to be, an independent principled thinker — not a mindless lemming.

ILC: What irritates you most about liberals?

West: First of all, let’s stop calling them liberals, because they co-opted that title.

When I think of liberals, I think of John Locke, the father of classical liberalism. What we have today in these post-modern liberals are progressive socialists who have more in common with Marx, Engels, and Alinsky than anyone else.

What irritates me the most about these progressive socialists are their lies, and they are incessant. Their lies to the black community has decimated the inner cities and what was once the foundation of that community, the family. As well, their politics of demagoguery and demonization is rooted in their quest for power and control — not in love of Country.

As well, what inspires me the most to fight against progressive socialists is their replacing the preeminence of individual in America with the elevation of the collective. Theirs is a drive towards the subjugation of the individual to government which is the antithesis of what this Constitutional Republic was created to be. Progressive socialists want victims…Conservatives create victors!

ILC: What are some of the downsides to being a conservative?

West: There are none!

Matter of fact, when these progressive socialists take the path of demeaning, denigrating, disrespecting, degrading, demonizing, disparaging, and destroying as their means of attack it just lets me know that the debate has been won.

The imbecilic rhetoric of progressive socialists is reflective of folks who know what they believe in has never been successful anywhere in the world. Their insanity is that they continue to believe in the same stuff and expect different results.

ILC: What are some of the greatest rewards of being a conservative?

West: The greatest reward in being a conservative is knowing that my Parents smile down from Heaven and know their work was not in vain.
Another reward is looking into the eyes of my two daughters knowing that I am on the right side of history for their future. See, what is great about Conservatism is that we pass on something greater to subsequent generations that what we had ourselves — that is our challenge, it is our reward.

ILC: As a conservative, what is your worst fear; what keeps you up at night?

West: I live by life by a simple code, “Fear God and dread not.”

I have no fears for my Country. I do have concerns. And my biggest concern is the Orwellian state in which we reside in America where a liberal progressive media deceives our population and keeps them purposefully uninformed. I am concerned with the control the progressive socialist teachers unions and college professors have in dementing the minds of our young people and hiding the truth from them.

It is as was said, “In a universe of deceit, truth becomes a revolutionary act”.

ILC: As a conservative, what is your biggest hope for the future; your dreams for the next generation?

West: My biggest hope for the future relates to my final point in the previous question.

I see a counter-culture revolution brewing among our young people. There is a growing movement of young people who want traditional values, conservative values. They are far more willing to tolerate others — unlike progressive socialists — but are not willing to compromise their principles, namely their individual freedom to think for themselves and not be a part of a “borg-like” structure. This next generation is starting to realize that government is lying to them and they are looking for something better. Many of them are looking at Libertarianism but they must be careful in recognizing that liberty does require personal responsibility.

I believe we are at the Dawn of a New America, an America which will reverse the “fundamental transformation” as screeched by Obama.

The future is bright for America. Why? Because America is all about Victors — not victims.