Federal land managers plan to round up 6,000 wild horses due to drought, wildfires

Federal land managers plan to round up 6,000 wild horses due to drought, wildfires
The Center Square 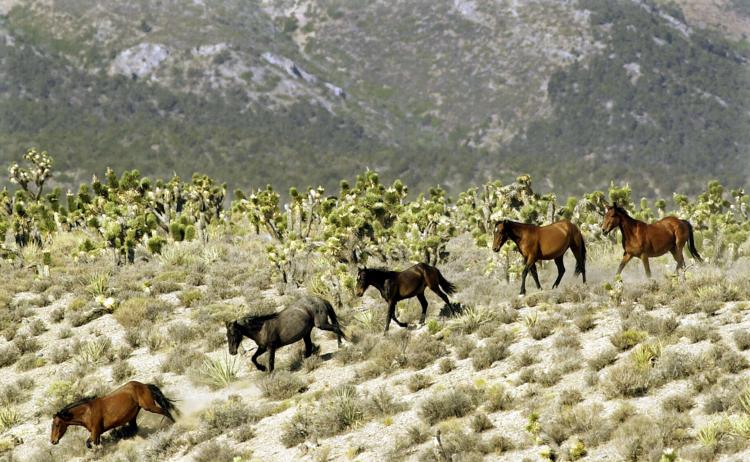 A herd of wild horses run free Friday, June 28, 2002, near Cold Creek, Nev. before being rounded up by the Bureau of Land Management.
AP Photo/Joe Cavaretta

(Derek Draplin) – Federal land managers said this week that more than​​ 6,000 wild horses and burros need to be rounded up due to drought and wildfires in some Western states.

The U.S. Bureau of Land Management (BLM) said emergency actions will be taken to “save imperiled animals and prevent widespread thirst and mortality” among herds mostly located in Colorado, Nevada, and Oregon.

“As one of the agencies charged with the responsibility to protect and manage America’s wild horses and burros, the BLM is prepared to take emergency action where we can in order to save the lives of these cherished animals,” BLM Deputy Director, Policy and Programs Nada Wolff Culver said in a statement.

“At the same time, we are committed to continuing our efforts to reduce overpopulation across the West and achieve healthy, sustainable herd sizes that are more capable of withstanding severe conditions, including prolonged drought, which are becoming more frequent due to climate change,” Culver added.

The agency has long dealt with wild horse and burro overpopulation, which poses issues for the animals and resources on federal and private lands. As of March 1, there are an estimated 86,000 animals on public lands, down from 95,000, but still “more than three times what is sustainable and healthy for the land and the animals,” BLM said.

One way BLM has reduced herd population is through its adoption incentive program, which offers people $1,000 to adopt and board an animal, a program some proponents have argued is cheaper than incurring costs of maintenance to board animals, which amounts to $50 million a year.

In Colorado, 450 animals are being removed from the West Douglas herd area by the end of the month due to the Oil Springs Fire that took place near the Colorado-Utah border.

The agency also plans to remove 783 animals from the Sand Wash Basin herd management area (HMA) near Craig next month because of “lack of forage and water.”

BLM is also removing animals in Oregon because of a “lack of forage and water.” The agency plans to remove 220 animals from the Palomino Buttes HMA; 450 from Sand Springs HMA; 950 from Sheepshead/Heath Creek HMA; and 500 from the Coyote Lake/Alvord-Tule Springs HMA.