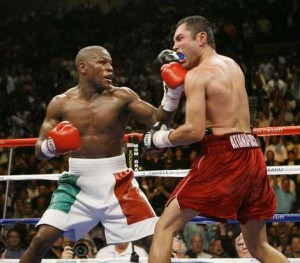 (Victor Joecks/NPRI) – Last week, in the wake of the controversial Pacquiao-Bradley fight, Sen. Harry Reid vowed to revisit legislation to regulate boxing. Bradley won the fight according to two of the three judges, giving him the official decision, though nearly every spectator and commentator believed that Pacquiao had won. In the aftermath of the fight, the hashtag #RIPBoxing was trending on Twitter.

As the Las Vegas Sun reports:

Nevada Sen. Harry Reid told reporters on Tuesday he would revisit a long-standing boxing bill he’s worked on in the past with Arizona Sen. John McCain. …

The bill is a nearly decade-old venture spearheaded by McCain to regulate boxing much like other professional sports. It would require uniform health and safety standards, common ranking criteria, and a commissioner to head an envisioned United States Boxing Commission and set rules and standards.

Last week, it wasn’t exactly clear what the new legislation would look like.

Today, we found out:

“The most recent controversy surrounding the Pacquiao-Bradley fight is the latest example of the legitimate distrust boxing fans have for the integrity of the sport,” McCain said. “After the Pacquiao-Bradley decision was announced, fans were clearly apoplectic and many commentators found the decision astonishing.” …

But let’s be clear. This is not an attempt to make boxing safer for fighters or more accessible to fans; it’s an attempt to further expand the influence of an already pervasive federal government.

Consider, once more, McCain’s description of the bill: It will improve health and safety standards, enhance uniformity in contracts, and — most importantly! — create a federal regulatory entity to oversee professional boxing.

Those things already exist, whether by the self-governance of fighters, the influence of trainers, the demands of promoters, the laws of the states in which the bouts take place or the rules of the worldwide organizations that sanction professional boxing.

And where they don’t exist, reform is easily possible without the creation of a federal regulatory entity. Top Rank, the state of Nevada and the WBO each have various means by which genuine reform can be achieved.

No, this is not an attempt to make boxers safer or boxing as a sport more accessible; it’s a misguided “solution” in the vein of much modern legislation. It derives from that dark place in so many federal policymakers that desires to do something when something bad — or perceived to be bad — happens.

It’s not enough for Senators Reid and McCain to disagree with the judges’ decision, sit back and let the already-in-place laws of the state of Nevada and the protocols of the WBO determine if any further action is required. Just like it’s not enough for them, in economic affairs, to let the free market correct itself. Too many federal policymakers have an all-consuming need to do something.

The sports world has experienced this before, most recently when Major League Baseball players were called to testify before various Senate subcommittees on the use of steroids. There was public outcry, the feeling that something wasn’t right and the opportunity for legislators to get themselves on national television.

But just because legislatures can act, doesn’t mean they ought to.

Boxing’s reputation, according to a spokesman for McCain, suffered “another black mark” after the Pacquiao-Bradley decision.

But black marks, like black eyes, heal. Boxing has always suffered from the possibility of fixed fights and poor decisions despite numerous state laws and regulations. Yet the sport endures. As Sen. Reid stated, “I judged fights. Championship fights. It’s hard to do. It’s an inexact science.”

So in our quest to restore the public’s tenuous trust in the turbulent yet resilient sport of boxing, let us consider what reforms are needed, and what governing bodies are best able to institute those reforms.

Does the sport require some reforms? Yes.

Should those reforms come from outside the sport — from politicians in Washington, D.C.? No.

Any reforms to the sport will be better if they happen organically, from within. Let fighters, trainers, promoters and sanctioning organizations sort out the details. Washington, D.C., has more important things to worry about than who wears the WBO welterweight belt.