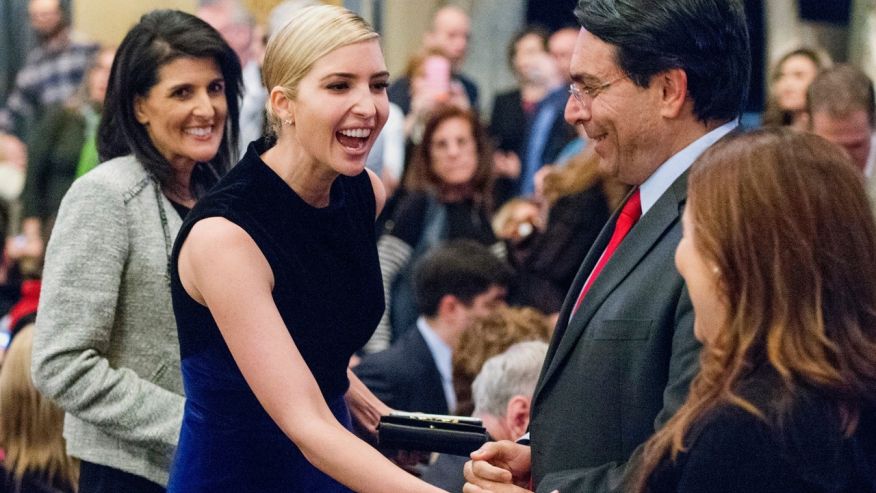 Ivanka Trump greets patrons as the United States Ambassador to the United Nations Nikki Haley, left, looks on before the start of the Broadway musical “Come From Away” in New York, Wednesday, March 15, 2017. (Courtesy: Ryan Remiorz/The Canadian Press/AP)

(Fox News) – President Trump’s daughter Ivanka will maintain a West Wing office, though she is not technically serving as a government employee and will not receive a salary, a senior White House official tells Fox News.

Since Trump took office, Ivanka has been a visible presence in the White House, where her husband, Jared Kushner, already serves as a senior adviser. On Friday, she participated in a meeting on vocational training with the president and German Chancellor Angela Merkel.

Jamie Gorelick, an attorney and ethics adviser for Ivanka Trump, told the Associated Press Monday that the first daughter will not have an official title, but will get a West Wing office, government-issued communications devices and security clearance to access classified information. Gorelick said Ivanka Trump would follow the ethics rules that apply to government employees.

“Our view is that the conservative approach is for Ivanka to voluntarily comply with the rules that would apply if she were a government employee, even though she is not,” said Gorelick, who also helped Kushner with the legal strategy that led to his White House appointment. “The White House Counsel’s Office agrees with that approach.”

Ivanka Trump’s role has already come under scrutiny because there is little precedent for a member of the first family with this kind of influence. The White House did not immediately respond to a request for comment.