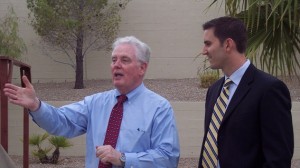 (Lori Piotrowski) – Tuesday evening, April 24, Assemblyman John Hambrick and his wife Nancy opened their home for a fundraiser for Wesley Duncan. This new face on the election scene is a former U.S. Air Force JAG lawyer who not only was stationed at Nellis Air Force Base in Las Vegas, but also served in Iraq’s Red Zone.

Addressing the crowd gathered poolside, Duncan talked about how his experiences with Iraqi troops and citizens heightened his awareness about life in the U.S. as well as awakening a desire to learn more about this country’s constitution and its history via the Federalist Papers and other period documents.

“In Iraq, citizens are required by law to testify, even against themselves. I saw witnesses afraid of being killed upon returning to their villages.”

Duncan also has won the support of former governer Bob List, and Assemblymen Pat Hickey, Randy Kirner, Richard McArtur, and Lynn Stewart, all of whom attended last night’s event. Veterans in Politics is also a strong supporter of Duncan, and they presented him with their endorsement.