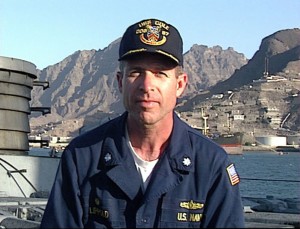 “I have spent my life and career in service to my country. I am excited to announce my candidacy for Nevada’s 2nd Congressional District and I look forward to serving my home state of Nevada as a member of the United States Congress,” Lippold said. “I’ve never run for public office before. I’m not a career politician and I don’t intend to be one. But there are times when the call to serve cannot be ignored. This is one of those times.”

Commander Lippold was in command of the USS Cole when it was attacked by al Qaeda terrorists in Yemen on October 12, 2000. He and his crew were able to save the ship, which remains in service today. Since retiring from the Navy in 2007 after 26 years of service, Lippold has served as Senior Fellow for Military Families United, a nonprofit organization dedicated to advocating for families who have lost loved ones in service to this country.

“I’m proud of what I’ve accomplished in my career but I am not content to sit still while Nevadans are struggling as they are today. Solving crucial problems will require the type of steadfast leadership and resolve I’ve demonstrated throughout my life,” Lippold said. “I think the people of Nevada have rightfully had it with the same old rhetoric and career politicians. They are ready to embrace new conservative leadership and a vision to return our state to prosperity. My campaign will be a crusade for the taxpayers of my district. I will fight every day to shrink the role of government, get Nevadans back to work, and pay down the national debt.”

Lippold pointed out that his probable opponents for the congressional seat, Sharron Angle and Brian Krolicki, have each run numerous times for various elected posts.

“I can’t remember an election cycle in Nevada in which Sharron Angle or Brian Krolicki weren’t running for something,” Lippold said. “They both have some good qualities but now is not the time for habitual, serial candidates. Now is the time for new conservative leadership.”

Commander Lippold’s first run for public office will be supported by former USS Cole crew members and the families of those who died during the al Qaeda attack.

“The people of Nevada could not ask for a man with more fortitude, resolve and integrity than Commander Kirk Lippold,” said Master Chief James Parlier, who served as Lippold’s Command Master Chief aboard the Cole. “Through his natural leadership abilities, he earned the trust and confidence of young men and women serving their nation far from home under hostile conditions. When the circumstances were most dire, Kirk Lippold rose to every challenge.”

Tom Wibberley’s son, Craig, was among the 17 sailors killed in the USS Cole attack.

“My son considered it a true honor to serve under Commander Lippold and I consider it my honor to support his candidacy for Congress. Frankly, we need more people like him,” Wibberley said. “There isn’t enough integrity and real, honest leadership in Washington these days. Kirk Lippold will bring those qualities to Congress.”

Commander Lippold played an instrumental role in crafting detainee policy for suspected terrorists during the initial stages of the War on Terrorism following the 9/11 attacks.

More information about Commander Kirk Lippold is available on his campaign website, www.kirklippoldforcongress.com