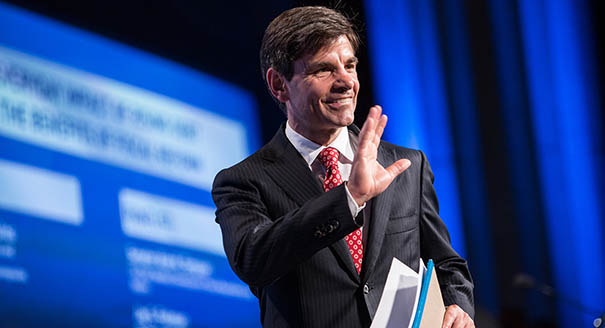 WASHINGTON, DC – MAY 15: George Stephanopoulos, host of Good Morning America, walks on stage at the 2012 Fiscal Summit on May 15, 2012 in Washington, DC. The third annual summit, held by the Peter G. Peterson Foundation, explored the theme “America’s Case for Action.” (Photo by Brendan Hoffman/Getty Images)

(Dylan Byers of Politico) – ABC News chief anchor George Stephanopoulos has given $75,000 to the Clinton Foundation in recent years, charitable contributions that he did not publicly disclose while reporting on the Clintons or their nonprofit organization, the On Media blog has learned.

In 2012, 2013 and 2014, Stephanopoulos made $25,000 donations to the 501 nonprofit founded by former President Bill Clinton, the foundation’s records show. Stephanopoulos never disclosed this information to viewers, even when interviewing author Peter Schweizer last month about his book “Clinton Cash,” which alleges that donations to the foundation may have influenced some of Hillary Clinton’s actions as secretary of state.

In a statement to the On Media blog on Thursday, Stephanopoulos apologized and said that he should have disclosed the donations to ABC News and its viewers.

“I made charitable donations to the Foundation in support of the work they’re doing on global AIDS prevention and deforestation, causes I care about deeply,” he said. “I thought that my contributions were a matter of public record. However, in hindsight, I should have taken the extra step of personally disclosing my donations to my employer and to the viewers on air during the recent news stories about the Foundation. I apologize.”

N&V StaffOctober 4, 2022
Read More
Scroll for more
Tap
Why I don’t believe the April jobs report – and neither should you
House authorizes NSA mass surveillance program