Gingrich: An Amazing Trip to Panama

(Newt Gingrich) – Callista and I had an amazing visit to Panama last weekend. 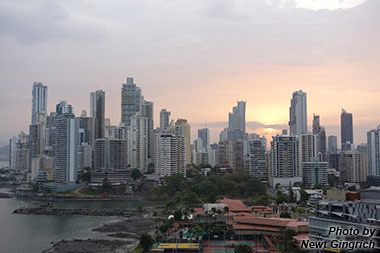 When we scheduled the trip we did not realize 34 heads of state would be in Panama City for the seventh Summit of the Americas. (Only the Chilean president was missing, since the country had a fire emergency threatening a major city.)

Ironically, the Summit meant there was less than traffic than normal. The Panamanian government had given workers several days off and almost everyone had left town to go to the beach.

The high points of our visit were two trips to the Panama Canal. On Sunday we went to the original canal and visited the locks and control room at Miraflores. On Monday we visited the new canal expansion project. 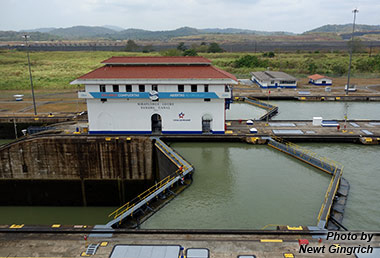 The original canal is amazing. The engineering ingenuity involved in a project that ended in 1914 is just astonishing. Watching a ship go through it more than 100 years later is equally remarkable.

In 1914, standards were issued for what kind of ships could go through the canal. These vessels are known as Panamax ships.

A Panamax ship can be up to 106 feet wide (107 feet for some rare shallow-draft ships). Since the original canal is only 110 feet wide, this means the ship has just two feet of clearance on each side.

Callista and I got to watch two ships pass through the canal. The precision was astonishing. The ships are held in the middle of the lock by cables connected to electric locomotives called “mules”. 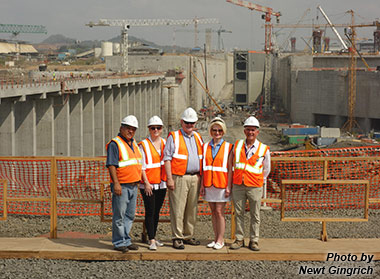 The canal has to be well-run because it moves ships through 24 hours a day, seven days a week.

Newer container ships are too big for the original canal, which is why Panama is building a larger set of locks to accommodate them. Ships that can make it through the new canal will be called New Panamax ships. These will be up to 161 feet wide but have a lot more room for error because the new set of locks will be 180 feet wide (70 feet wider than the current locks).

As you might expect, the project to build the new canal is enormous. It has the largest cement plant in the Western hemisphere (which will be torn down when the project is complete). 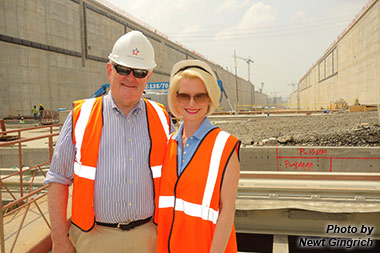 Callista and I had a chance to walk down on the floor of the new locks. They will begin filling them with water next month so this was a once-in-a-lifetime opportunity.

The scale of the work, the steadiness of the Panamanian engineers who were leading the project, and the sophistication of their systems were all impressive.

It says a lot about the importance of the canal to the people of Panama that 78% voted for the expansion project.

The Panamanian people are very proud of the way they have continued to operate the canal since taking possession from the United States in 1999. They should be. It’s a remarkable achievement and about to become even more remarkable.