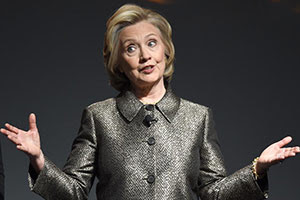 (Newt Gingrich) – Bill Clinton is famous for his power of empathy–his ability to make voters think he can “feel their pain,” as he put it when running for president in 1992. Twenty-three years later, Hillary Clinton wants voters to think she feels their pain, too. She reminds us that she’s a concerned grandmother. She tells us she’s fighting not for herself, but “for all the people like my mother who need somebody in their corner”–people who “need a leader who cares about them again.” But despite these carefully scripted lines, Secretary Clinton keeps tripping into moments of unintentional candor.

To hear Hillary speak off the cuff is often to hear a callous indifference that shocks the normal Americans she says she’s fighting for. Perhaps that’s why she does it so rarely.

Even when she is prepared, her remarks can be oddly uncaring. On Thursday, she spent much of her opening statement before the House Select Committee on Benghazi explaining that Ambassador Chris Stevens knew the risks of going to Benghazi, and he accepted them. The argument was more subtle, though no less callous, than her outburst in her 2013 testimony on the attack, in which she asked, exasperated at being questioned, “What difference, at this point, does it make?”

Appearing on MSNBC, Clinton was asked by Rachel Maddow about the appalling corruption and incompetence at the Department of Veterans Affairs. It was a reasonable question for an aspiring commander-in-chief, one month after the VA Inspector General reported that more than 300,000 veterans likely died while waiting for care from the agency. Of course, that number doesn’t count the hundreds of thousands of others whose health deteriorated unnecessarily because of the wait times, or the hundreds of thousands more who are still waiting today.

So what did Secretary Clinton have to say about VA? About the corrupt scheduling practices–including at times the destruction of veterans’ personal medical records–at 70 percent of the facilities surveyed? What did she have to say about the 175 days it takes to transfer files from the Defense Department to the VA? Or the instances in which VA employees injected dying veterans with water instead of morphine in order to steal the drugs?

“Nobody would believe that from the coverage that you see,” she continued, “and the constant berating of the VA that comes from Republicans in part in pursuit of this ideological agenda that they have… It’s not been as widespread as it has been made out to be.”

And anyway, what difference, at this point, does it make?

Secretary Clinton’s comments were in stark contrast to President Obama’s response last year. He was reported to be “madder than hell” about the corruption at the VA, and said that he “[would] not stand for it. There must be consequences.” The failures Hillary now minimizes caused him to fire former VA Secretary Shinseki and appoint Rob Nabors, his own deputy chief of staff, to investigate the agency. (That report, contrary to Clinton’s characterization of the problem, found “significant and chronic system failures” at the VA.)

Is there a failure of government or of personal character that Secretary Clinton wouldn’t shamelessly minimize for political reasons? And is there anything she’s not prepared to blame on “Republicans” and their “ideological agenda”, if the deaths of four Americans in Libya and 300,000 veterans on waiting lists were not too much? Secretary Clinton’s breathtaking callousness about those who have served our country raises these questions–and many more.